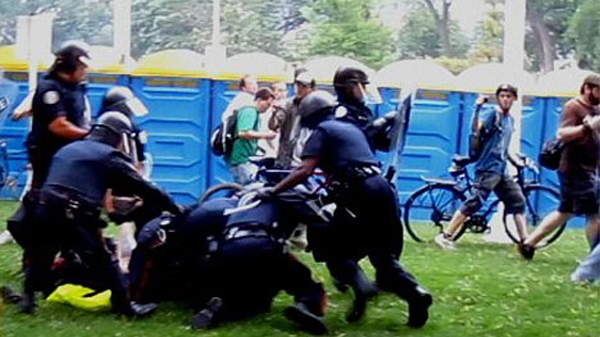 Ontario's Special Investigations Unit is looking for witnesses to the arrest of Adam Nobody during the G20 Summit on June 26, 2010, as captured on video images released on Dec. 7, 2010.

Ontario's police watchdog is requesting assistance in a reopened investigation into injuries sustained by a Toronto man who was arrested by police during the G20 Summit.

The Special Investigations Unit released two photographs on Monday, taken from video capturing the arrest of Adam Nobody on June 26.

The video recording in question is at the centre of a bizarre standoff between Ontario's SIU and Toronto police Chief Bill Blair.

The SIU had originally closed the investigation into allegations that Nobody was mistreated during the arrest. Director Ian Scott had said that while the video tape suggested there were reasonable grounds to believe excessive force was used, they were unable to identify the officers involved.

Blair later said forensic investigation of the video proved it had been tampered with and accused the SIU of mixing speculation into its decision. He suggested something in the missing moments of video footage may have led to the police's heavy-handed arrest.

Analysis of the tape showed that there were several missing seconds, but the man who shot the video, John Bridge, said that he had shut off the camera so he could flee police.

But once he realized he was not the target of the chase, he again started shooting the scene.

After Blair's comments, Scott said the SIU would reopen the investigation and asked the chief to provide forensic evidence that the tape had been tampered with.

Blair has since apologized to Nobody and later clarified that he had no proof that Nobody was armed or acted violently during the missing moments of the tape.

"I regret the false impression that my comments may have created and apologize to Mr. Nobody," Blair said in a statement last week.

Nobody says he was taken to Toronto East General Hospital for treatment of a fracture below his right eye.

The photographs released on Tuesday capture several people in the background of Nobody's arrest who may have photographs of the melee from another angle.

In one photograph, a man with a bicycle can be seen with what appears to be a camera in his right hand. A second photograph shows a man wearing a baseball cap with a camera.

Both cameras appear to be pointed at Nobody's arrest, which involved as many as seven officers fully equipped in riot gear.