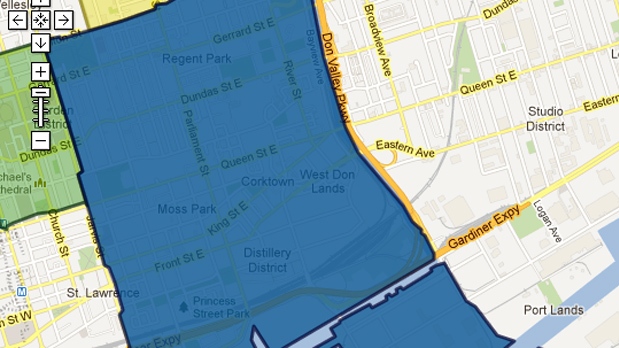 This screen grab of a Google map on Toronto Hydro's website shows the general area of a power outage Thursday, July 5, 2012.

Toronto Hydro believes an overheated circuit breaker in a power substation was the cause of a massive power outage that affected nearly 6,500 residents Thursday evening.

The overheated breaker caused a small fired near Adelaide and George streets, and shut off power across a huge swath of the city’s downtown core.

The affected area, which stretched from York Street east to the Don Valley Parkway and from Queen’s Quay north to Carlton Street, lost power just before 9 p.m. Thursday.

Toronto Hydro had dispatched crews to address the outage on Thursday night, and by 10:30 p.m. the fire had been extinguished and crews were working on restoring power.

Speaking shortly after 10:30 p.m., Toronto Hydro spokesperson Tanya Bruckmueller said she expected the power to be restored within three to four hours in a “best case scenario.”