TORONTO -- An Ontario driver said she's been left traumatized and fearing for her safety after her Hyundai SUV randomly slammed on the brakes on its own multiple times.

Unionville resident Erica Mesa spent $47,000 on a new Hyundai Tucson in July 2019 and had no issues with the vehicle until three months later when she was driving to Blue Mountain in Collingwood.

The 25-year-old said she was driving on the highway with four other people when a light came on falsely indicating she was in danger of a front-end collision. Seconds later, the brakes slammed on and the vehicle came to a sudden halt, she said.

Shaken up, Mesa said she continued driving but later that week brought the car into a Hyundai dealership. She said she was told by mechanics that something might have temporarily blocked a safety sensor in the car that is used to avoid collisions.

Mesa said she was told the issue would not happen again and she could continue driving it.

The issue has happened four times now, Mesa says, and although Hyundai told CTV News Toronto her car has been repaired, she still feels it's unsafe.

The second time it happened was two months following the initial incident. 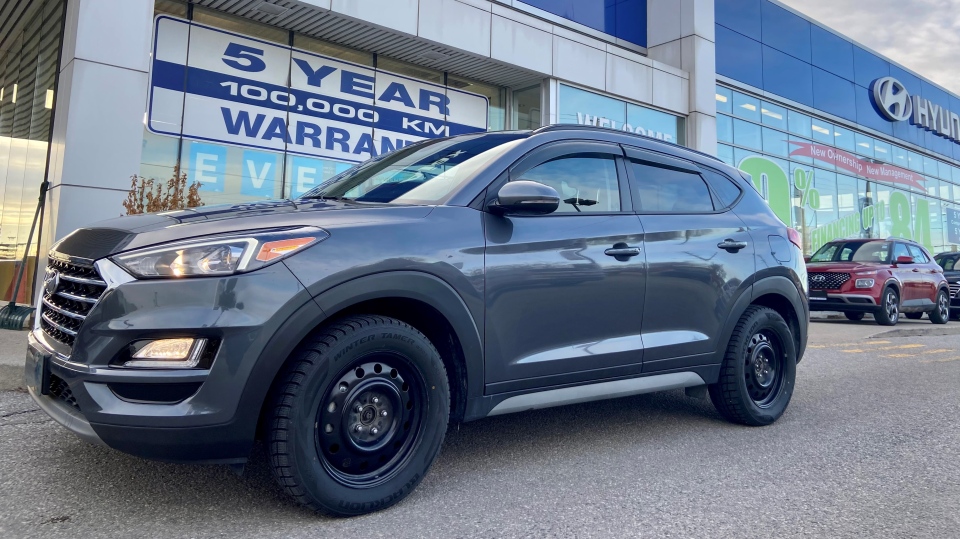 This time Mesa was in Ottawa, and she was driving at a slow speed. She said the same indicator light came on and then the brakes locked.

Mesa restarted the car, drove to a relative's house and hoped the car would be fine to drive back to Toronto the next day, but on the way back it happened again.

"I didn't know what to do," Mesa told CTV News Toronto. "The light just blinks and then the car turns on the brakes."

Mesa decided at that point it wasn't safe to drive the car anymore and called a tow truck to take her vehicle to a Hyundai dealership.

"Hyundai said they were going to replace the inhibitor switch," Mesa said. "They said there was moisture in there and somehow it was tricking the car’s computer into thinking there was a vehicle in front of me."

She said the next day she picked up the car and was told "it's not going to happen again."

Everything was fine for more than a year, until one day in February 2021 when Mesa was driving nearly 120 km/h on Highway 407.

She said the warning light blinked out of nowhere and the car slammed on the brakes. "It was 120 km/h to zero in seconds. I really thought I was going to die," Mesa said. "The person behind me almost hit me. I was bawling my eyes out. I told my partner ‘I need you to come pick me up.'"

Mesa's partner drove to where she was on the highway and they took the car to a Hyundai dealership in Ajax. She said the dealership replaced the inhibitor switch again and deemed the vehicle safe to drive.

In a statement to CTV News Toronto, a Hyundai Canada spokesperson said that when the inhibitor switch was replaced in February on Mesa's car, the vehicle was "tested extensively."

"Our records show that the technicians found a damaged inhibitor switch, which was replaced under warranty and at no cost to the customer," the spokesperson said. "The repair was also performed with a field engineer present. The vehicle was then road-tested extensively and no faults were observed."

The spokesperson said that following the replacement of the inhibitor switch they "do not have record of any further issues once the repair was completed."

Mesa said she has been left so traumatized by the ordeal that driving the car isn't an option for her anymore. She doesn't trust that fixing the inhibitor switch for the second time will solve the problem and said it isn't worth risking her life.

She wants her money back from Hyundai Canada and claims they aren't taking her issue seriously. Hyundai Canada will allow her to trade-in the car for $21,000 but will not refund her, she said.

"I don't want to die driving this car," Mesa said through tears. "For a car, why the heck would you cry? But this has happened to me four times and nobody understands."

"It's given me such trauma."