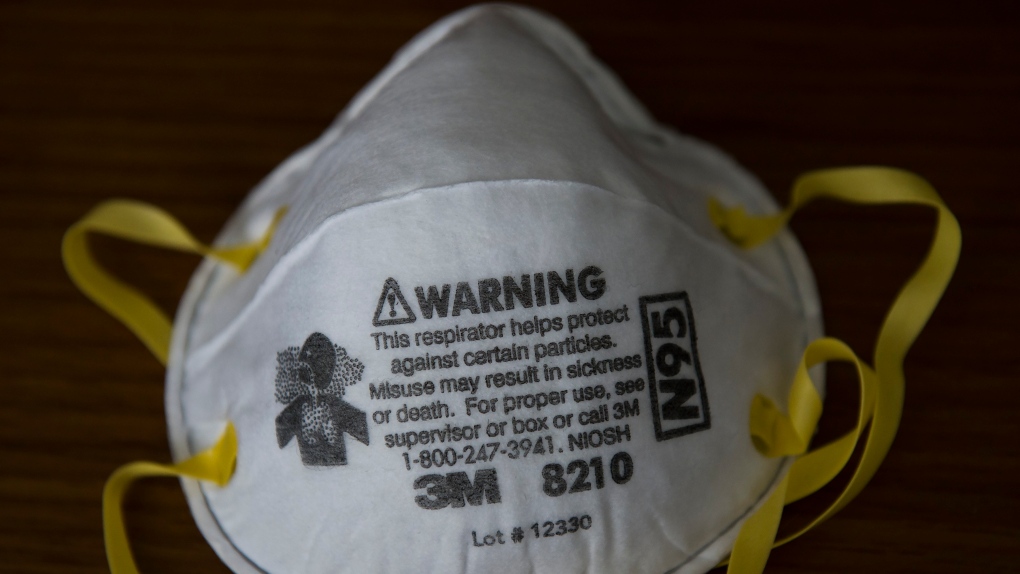 A 3M mask which health care workers are in dire need of is shown in Mississauga, Ont., on Friday, April 3, 2020. THE CANADIAN PRESS/Nathan Denette

TORONTO -- The Ontario government says it is aware of potential counterfeit N95 masks within the provincial personal protective equipment (PPE) stockpile, including some that were distributed to health-care providers.

Health system partners were notified of the counterfeit masks in a memo sent on Friday. In the memo the province identifies lot codes for the N95 respirators, and urges health partners to review their current inventory “to see if you have any of the identified lot numbers received from the ministry’s warehouse.”

“The Ministry of Health is urgently reviewing all inventory in its warehouses to identify any affected product. We have also alerted our federal partners at Health Canada of the situation by 3M and have been working with them to address the issue,” a spokesperson for the Ministry of Health said in a statement.

If a counterfeit product is found, health partners should quarantine the mask and notify the ministry immediately.

The ministry said it alerted health system partners of the masks out of an abundance of caution.

No further information has been provided regarding the number of counterfeit masks recovered or where they were found.

Penny Wise, president of 3M Canada, said in a statement that the company has been receiving increasing reports of fraud related to respirators in Canada.

“These have included reports of fake/counterfeit product as well as fraudulent offers where product is offered but not delivered,” Wise said. “3M has recently assisted the government of Ontario and other provincial authorities in confirming that N95 respirators purchased from distributors with no relationship to 3M are not authentic 3M products.”

3M distributes products through a network of authorized distributors, and encourages customers to only purchase from those approved by the company.

Wise adds that the company is working with law enforcement to eliminate fraudulent masks from circulation, and says that counterfeit products may not meet “the rigorous quality stands” of the 3M masks.

Ontario’s Ministry of Health says that, “wherever possible,” PPE is procured from known, reliable vendors that have a relationship with the government. The Ministry says it has also mandated that all of 3M’s procured N95 masks undergo an inspection from an independent third party.

“Normally we deal with trusted providers that we’ve had a long relationship with and we also have hired an independent third party to investigate the shipments to make sure that they are they purport to be, Health Minister Christine Elliott told reporters Friday.

“I understand in this particular situation, however, they were virtually identical in appearance and from the stickers that were on the outside of the boxes. And so I suspect that’s how it happened.”

This month, 3M received more reports of potential counterfeit products than in the first wave of the COVID-19 pandemic.