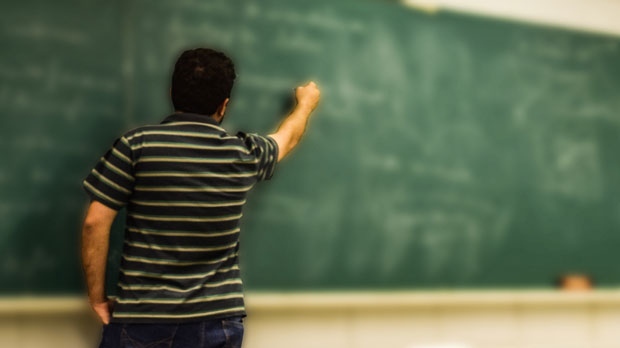 New teachers in Ontario will soon have to pass a math test by scoring at least 70 per cent -- a process their unions say will do nothing to improve students' math skills.

A memo from the deputy education minister Nancy Naylor, obtained by The Canadian Press, says the new test will be in place at the end of this upcoming academic year and will include both math questions based on elementary and secondary school concepts, and questions on math assessment, planning and facilitating student learning.

But teachers' unions question the value of giving all teachers the same test.

"Expecting a kindergarten teacher to have a firm grasp of calculus makes no sense," Sam Hammond, president of the Elementary Teachers' Federation of Ontario, said in a statement.

Harvey Bischof, president of the Ontario Secondary School Teachers' Federation, said this kind of across-the-board testing of all teachers, when a majority of them will never teach math, won't impact students' math outcomes.

"In Ontario's high school system teachers teach in their areas of qualification," he said. "So what we have here is the potential to have an excellent, let's say, art or geography or history teacher, not qualified to teach because they don't pass a math test, a course that they would never teach."

Both Hammond and Bischof called on the government to focus on the curriculum, rather than testing teachers.

The government has announced a new math curriculum that will be phased in over four years. It will focus on basic concepts and skills, with the first changes coming into effect in the fall.

A so-called discovery math curriculum, which Ford has railed against, is being scrapped. Discovery math does not focus on memorization of math problems that were traditionally taught in the classroom. Instead, it encourages students to engage in problem-solving that grounds math in its application.

Education Minister Stephen Lecce said in a statement Tuesday that in addition to the new math strategy, professional development of Ontario's educators will help students succeed.

"Too many students in Ontario are not succeeding in mathematics -- a foundational competency that is critical to their success in life and in the labour market," he wrote.

Last August, the Education Quality and Accountability Office, which administers standardized assessments in the province, said math test scores among public elementary students in Ontario have been decreasing over the last five years.

The latest EQAO results are set to be released Wednesday.

That office has also been tasked with developing the new test for teachers.

Teachers will have to pay an unspecified fee to try the test again if they don't pass the first time, Naylor wrote in the memo. There will be no limit on the number of times they can take the test.