TORONTO -- Premier Doug Ford has caused confusion about Ontario's emergency COVID-19 measures by admitting that he visited with his daughters at his home on Mother’s Day.

Ford told reporters at Queen’s Park on Monday that he had two of his daughters over this weekend, which prompted a question about whether people can expand their social circle and start visiting with family outside of their household.

Ford, who lives with his wife and two of his four daughters, said his two other daughters, who do not live with him, came over to visit.

"There was six of us, direct family," Ford said. "None of the husbands, boyfriends came, just themselves."

Ford told reporters that he trusts “the judgement of the people of Ontario” and that if people keep their gatherings small as possible, “that would be very helpful.”

"(It's) just for a little bit longer and I appreciate everyone's cooperation with that."

The current guidelines issued by the provincial government say that "everyone in Ontario should practice physical distancing to reduce their exposure to other people."

"This means staying at least two metres away from anyone outside your household."

Ford said that the Chief Medical Officer of Health, Dr. David Williams, wants Ontarians interacting with "immediate family" only. Williams, however, made it clear on Monday that was not his recommendations.

He said that that Ontarians should only gather with those within their immediate household. He said that if people want to visit family, they must practice physical distancing and remain six feet apart. For example, he said that his family visited over the weekend, but stayed on the lawn.

"Outside of that we have not opened that provision up yet," Williams said. He added that people should do their part and wait to host social gatherings until getting further direction. 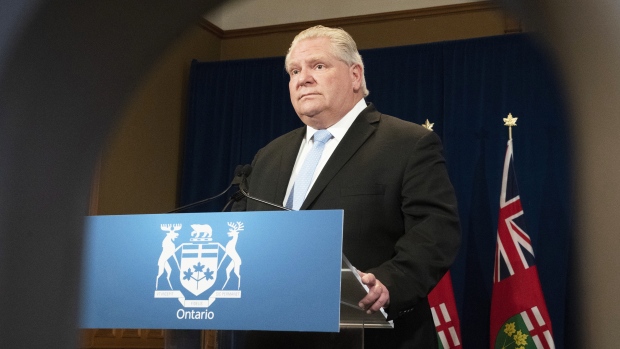 When the cases of COVID-19 steadily decline in Ontario for an extended period, Williams said that officials may allow people to extend their social bubble to include more people, but at the moment that isn’t the case.

Ford, on the other hand, appears to believe the province is in a position where those restrictions should be eased up. CTV News Toronto contacted the premier’s office for further clarification after Ford made the contradicting remarks.

"We understand that people want to spend more time with their friends, family and loved ones," a statement provided by Ford’s office said. “Thanks to our collective efforts, we are now in a position where we can start to plan to ease public health measures."

"As we do, we continue to rely on Ontarians to use their best judgement when interacting with individuals from outside their household, e.g., staying six feet apart, ensuring people are symptom free, and continuing to practice proper hygiene."

Dr. Williams says its "important to follow the directions" from the Chief Medical Officer of Health.

He is careful to state the rules, while avoiding criticism of the premier for a weekend visit with family. #onpoli

Meanwhile, NDP Leader Andrea Horwath suggested that the premier might be sending mixed messages over whether it’s appropriate -- or even legal -- to visit with immediate family members.

"I get it that people are really desperate for that contact with their loved ones but what we want to avoid is a re-spreading of the disease," Horwath said Monday.

While Horwath said the premier made "his own choices" over the weekend, she agreed that residents should assess the risk before considering a visit outside the household.

"If your mom's not over 70 maybe you can risk a visit," Horwath said.

Premier Ford seems to have struck a nerve with the province over his weekend visit with his 4 daughters.

Two of his daughters, the premier said, don't live in his household. An Emergency Order enacted by Ford banned social gatherings over 5. #onpoli pic.twitter.com/S0LFtRQmZF