Ontario man charged more than $10,000 for vacation souvenirs worth $70

TORONTO -- An Ontario man who was charged $10,000 for $70 worth of vacation souvenirs in Jamaica has been told by his bank he may not be refunded because he originally agreed to the transcation.

Hamilton man Rejent Guay was on holiday earlier this month when he purchased a small vase and some clothing for his daughter at a souvenir shop. He didn't realize the expensive error until he returned home.

“I looked down at my bill and I saw one transaction for more than $10,000 Canadian,” Guay told CTV News Toronto on Wednesday.

Guay said that when he was in the store, he was told the total price for the vase and clothing was $7,500 Jamaican currency, which is equal to about $56 in U.S. funds. He noticed the vendor had charged him US$7,500, which is equal to more than $10,000 Canadian. 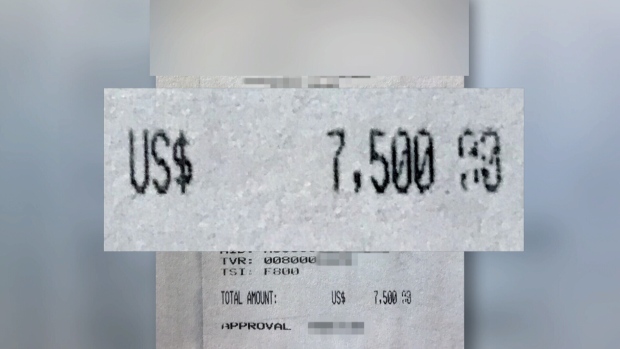 “Unfortunately, it got missed. It happened very fast. You enter your PIN, you get the receipt and for all I know they stuck it in the bag and I didn't even look at it,” he said.

The Guay family say they were taken by bus from their hotel to a gated shopping district in Ocho Rios. where they went into the store. There was no phone number on the receipt and it was not itemized to show what they bought. Guay says he called the resort to get a phone number for the store and was able to connect with the owner who had sold him the items.

Guay told the vendor it was an obvious mistake and he was overcharged.

“He agreed I was overcharged and that it should have been in Jamaican currency. I said can we do a refund, but he didn't say sorry or anything like that,” Guay said.

Guay became concerned when he contacted his bank RBC and his Visa card to tell them what happened. They said it was unfortunate, but that he had agreed to the transaction.

“They told me because I authorized it and used a PIN they are considering it authorized even though I did not authorize it in that currency,” Guay said.

Guay is now concerned he may not get his money back. He has been in contact with the vendor and RBC and he has filed a transaction dispute with Visa, but he was told an investigation could take four to six weeks.

Guay said he has learned a lesson and will now be much more diligent when checking receipts if he is travelling and shopping outside of Canada. He also feels Visa should have alerted him immediately to such a large transaction when he was still in Jamaica because he could have resolved the issue while he was there.