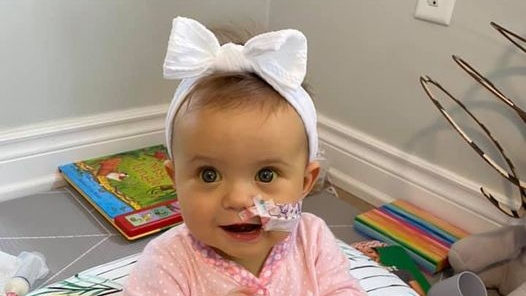 TORONTO -- A Collingwood family is raising funds for the aftermath of a procedure that will leave them reeling for years.

Emma Garner gave birth to baby Sloan just nine months ago — but their time together has differed from a normal newborn-mother experience.

“She was born healthy. There was nothing concerning when she was born,” Garner told CTV News Toronto Thursday.

Before long, Sloan was showing signs of newborn jaundice.

“She got newborn jaundice, which a high amount of babies do, but what was different with her jaundice was that it never went away. It just kept getting worse and worse,” she continued.

At seven weeks old, Sloan underwent further testing, revealing that “all of her levels were extremely elevated," Garner said.

The next morning, Sloan was admitted to The Hospital for Sick Kids in Toronto, where she was diagnosed with Biliary Atresia ,a relatively rare disease that begins in early infancy and affects about one in every 10,000 to 20,000 infants.

A week later, she would undergo a surgery called the Kasai Procedure — a major internal surgery that connects the liver to the shortened intestine in the hopes of draining bile.

Sloan faced a challenging recovery period after her surgery.

“She just got recurring infection after infection. We were in the hospital a couple of times and eventually, they just said ‘This isn't working anymore.’ Her jaundice wasn't going away with antibiotics or anything,” Garner said.

Garner was soon told that Sloan would require a liver transplant at just nine months. Luckily, Garner was found to be a match. She will donate her liver to her daughter on June 24.

She said she felt a mixture of “relief and anxiety” upon finding out she was a match.

However, for two years after the procedure, Sloan will need to be on immunosuppressants, meaning that Garner will be out of work.

“I'm a registered nurse, so after her transplant, she'll be on immunosuppressants. Her immune system [will be] just horrible. So, I just decided not to go back to work for at least the future years,” said Garner.

In addition to Garner having to put a pause on her career, she will not be able to care for Sloan for six to eight weeks after the procedure, meaning her partner, Adrian, will also have to take time off work during this time.

The Garner family has started a GoFundMe to cover costs accumulated by medical care, accommodation costs during the time of the procedure and lack of income.

“Our goal is [..] to focus on post-op recovery and health without worrying about the costs associated with it.”