A memo sent to stakeholders and partners this week, obtained by CTV News Toronto, shows the government will continue to supplement all lost revenue from the lower fees for the next year.

In 2023, child-care fees for parents whose children are enrolled in a facility under the Canada-Wide Early Learning and Child Care (CWELCC) system will continue to be reduced by an additional 37 per cent.

This is in addition to the 25 per cent fee reduction retroactive to April 1, 2022.The combined reductions will bring fees to 50 per cent of 2020 levels.

Throughout the last year, for-profit child-care operators have expressed concern about how this system will impact their overall operating costs, citing a lack of transparency about how funding would be divided after 2022.

Holly Moran, deputy minister within the Ministry of Education, said in the memo the government wanted to provide “early and clear communication” regarding the government’s funding approaches for the 2023 year.

In the documents, the government clearly lays out that licenced child-care operators will not lose any money in 2023 by opting into the program. There will be an additional $1.2 billion of funding set aside to make up the difference of the lower fees. 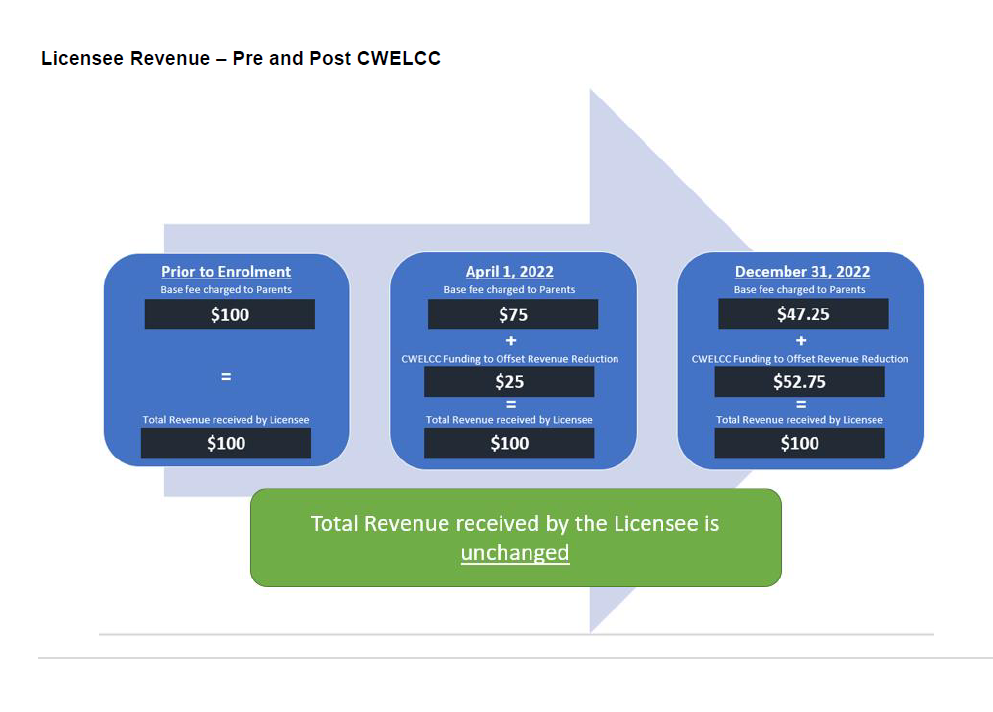 A chart included in a memo sent to child-care partners shows how the government will pay the difference lost to operators due to reduced fees.

Maggie Moser, an operator of a child-care centre and director of the Ontario Association of Independent Childcare Centres, told CTV News Toronto that while it’s positive the government has listened to the concerns of operators, there remains a lack of clarity about what will happen after 2023.

This memo itself, Moser added, is also not a binding contact.

“Most operators are still waiting because we don't really have a firm plan in writing or contract,” she said.

“What they're telling us is that the detailed guidelines are not going to be issued until early November, but they've set a deadline of November 1 to opt in. And that's quite a quandary for a business.”

It is unclear how the funding will work beyond 2023. The ministry said in the memo it is working on the development of a new funding formula that “aims to integrate the current approach for allocating child-care funds with the new CWELCC program in order to support the need for clarity and transparency.”

However Moser said that unless that formula includes additional revenue for operators to make up for inflation and allow them to pay their rent, salaries and food costs, it will be next to impossible to run their facilities.

“We don't have an indication of what's going to be added to the present guidelines to arrive at that solution or how they are going to make sure that owners of child-care centres are compensated to a level that their centres are viable.”

The majority of the Ontario Association of Independent Childcare Centres' more than 300 members will decide on Oct. 31 whether or not to sign on to the program.

ABOUT 80 PER CENT OF CENTRES HAVE OPTED IN

The Ontario government has said that as of Oct. 21, about 80 per cent of child-care operators in the province have opted in to the program.

In Toronto, about 801 of the city’s roughly 1,000 day-care centres have said they will take part in the program. Just over 81 per cent of those are not-for-profit facilities.

This marks an increase from the 535 child-care centres that had opted into the program in August ahead of the original Sept. 1 deadline before it was extended by another two months.

Of the 53 operators in Toronto that have indicated they will not be participating in the program as of Oct. 18, about half are not-for-profit.

At least 129 child-care providers in Peel Region have opted in to CWELCC, representing about 85 per cent of eligible spaces. In Durham, 260 centres have opted in and 12 have said they would not be participating. The majority of those centres are not-for-profit facilities.

There are 462 centres in York Region that have opted in as of Oct. 19. Of those, 294 are not-for-profit facilities and 168 are for-profit centres. 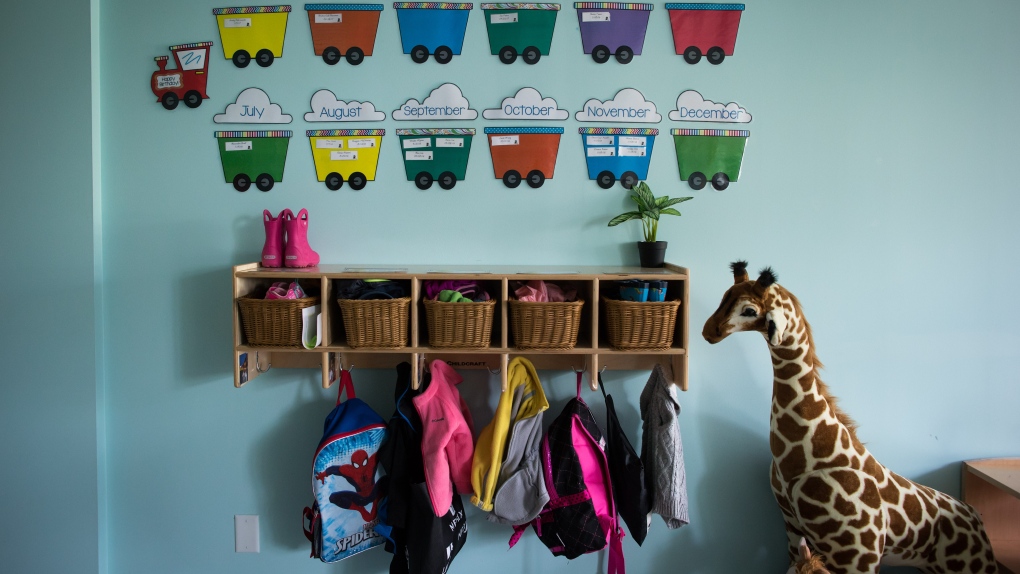 Children's backpacks and shoes are seen at a daycare on Tuesday May 29, 2018. (THE CANADIAN PRESS/Darryl Dyck)

Advocates for not-for-profit child-care centres in Ontario have said they are confident the majority of operators will decide to opt in to the program by the Nov. 1 deadline.

Carolyn Ferns, the policy coordinator for Ontario Coalition For Better Childcare, said the memo was likely released in an effort to get more programs to sign up and should provide operators with a bit more peace of mind.

“What the province has done here is decide to say 2023 is a second transitional year and we're going to keep the same process we have right now,” she said.

“Hopefully that will get programs to decide to opt-in and get those rebates and fee reductions to families.”

However she also expressed concern about the way this program has developed, behind closed doors and in a “very secretive” manner. Ferns said there is concern about how public funds will be used in light of recent guideline changes removing profit caps and proposals that would allow operators more discretion over their expenses.

“There are a lot of questions then about how those public funds should be used, you know, at an operation at operator level,” Morna Ballyntine with Child Care Now added.

“The not-for-profit operators, of course, have never used any funding, whether it's from parent fees or from government sources, to increase their profits…the question is, how much or if any of that public funding should actually be going to increasing the profits of the for-profit sector.”

The guideline changes have been a point of contention between the federal and provincial government. While in Toronto Thursday, Federal Families Minister Karina Gould would not say how her letter of concern regarding the changes, sent to Education Minister Stephen Lecce, was received, but did say she hopes the province is being “mindful.”

“We are allowing for some for-profit expansion in Ontario, which is typically not the case in other provinces and territories, so we just (have) to be very mindful that public dollars are being used appropriately,” she told reporters.

Lecce, meanwhile, said that between 24 and 30 per cent of child-care operators would have been excluded from the deal if revisions had not been made.

“The overwhelming majority of for-profit child-care operators are small business women who asked us to appreciate the investment and the risk they take,” he said.

In a statement sent on Saturday morning, Lecce said the province is committed to ensuring families have access to affordable child-care.

“That's why we’re working to save hard-working parents an average of $6,000 this year and $12,000 by next year,” he said. “Not only does this deal put money directly back into the pockets of parents and families, it also protects parental choice while creating 86,000 more child-care spaces.”

The government has already committed more than $3.9 billion so far for the $13.2 billion six-year subsidized child-care program.

With files from Andrew Brennan and Canadian Press

How much water do you need to drink in a day? 'Eight glasses a day' rule a myth: study