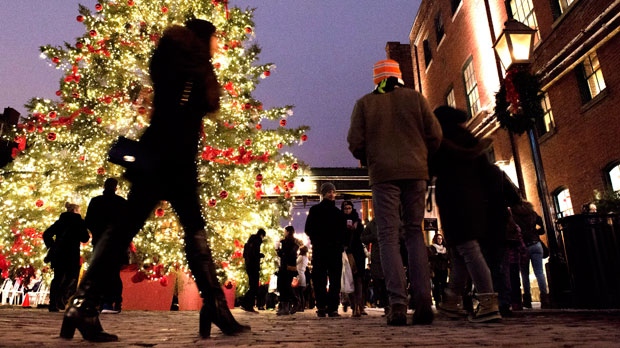 Shoppers take in the sights at the Toronto Christmas Market in The Distillery Historic District on Thursday Dec. 18, 2014. The market runs until Sunday Dec. 21, 2014. THE CANADIAN PRESS/Frank Gunn

It will cost a little more money to get into the holiday spirit this year.

Officials with the popular Toronto Christmas Market, held annually in the city’s Distillery Historic District, announced their plans for the event’s 10th anniversary on Tuesday, promising the market will be “the most magical yet.” But visitors will be expected to pay a higher pricetag in order to experience the holiday merriment.

Last year, visitors were charged $6 on weekends to gain access to the vendors and Instagram-worthy attractions at the Toronto Christmas Market. This year, according to a news release issued on Tuesday, visitors will have to pay $8 online if they purchase a ticket for weekend entry in advance or $12 at the door.

Admission will continue to be free on weekdays until 6 p.m. on Friday.

"Ticket proceeds allow us to meet the direction of the city, maintain the festival's growth, enhancements, operations, and continue our annual support for our charitable beneficiaries,” Mathew Rosenblatt, Toronto Christmas Market creator and executive director, said in a statement.

A portion of the proceeds from the ticket sales will be donated to charitable organizations like the Daily Bread Food Bank, Plan Canada, the Toronto Star Santa Claus Fund and the Yonge Street Mission.

Officials have also said they will offer free admission on the first two opening weekends to anyone who brings at least eight cans of food for the Daily Bread Food Bank.

The market is promising the return of its Ferris wheel, a more than 50-foot Christmas tree donated by Forests Ontario and enhancements to their 100-foot light tunnel, in addition to multiple food and artisan vendors.

Parking has typically been a challenge for those wanting to visit the market, and this year officials say they will be implementing a “comprehensive traffic plan to reduce some of the frustration.”

Full details of the traffic plan are expected to be released on Nov. 1.

The Toronto Christmas Market will begin on Nov. 14 and will run until Dec. 22.