The daughter of slain billionaires Barry and Honey Sherman is making an appeal for information ahead of the fifth anniversary of her parents' still unsolved murder.

In a statement released Thursday, Alexandra Krawczyk — one of the couple’s four children — said justice has so far been elusive for her family and her heart remains “broken.”

“Five years ago, on Dec. 13, 2017, my beloved parents, Honey and Barry Sherman, were brutally murdered in their Toronto home. So far there has been no justice for them and no closure for me and my family,” Krawczyk wrote.

“My heart is broken. My loss is immeasurable. My children have lost their grandparents. We miss their guidance, love, and wisdom.”

She said the family is releasing the appeal for information because “we cannot let another year pass without justice being done.”

Honey and Barry Sherman were found dead in their Old Colony Road home on Dec. 15, 2017. A realtor who was showing the home to prospective buyers found their bodies and called police.

The two were found in a “semi-seated” position in the pool area in the basement, with black belts looped around their necks and attached to a railing.

Police have said they believe the couple was murdered two days before they were found. 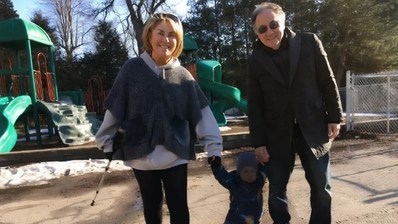 Honey and Barry Sherman are seen in a new photo released on Dec. 8, 2022 (CNW Group/Alex Krawczyk)

Barry Sherman was the founder of generic pharmaceutical giant Apotex and the two were well-known philanthropists in the community.

Their deaths shocked the city and sparked a police investigation that remains ongoing. But there have been few breakthroughs announced.

A year ago, police released surveillance footage of a suspect seen near the Sherman home around the time of the murders whose behaviour was deemed “highly suspicious.” Police said they were releasing the footage in the hopes that someone might be able to help identify the suspect.

Krawczyk said that while the family has been traumatized by the murder of the couple, their killings have also hurt the community which they worked hard to give back to.

“With kindness and humility, my parents provided leadership and unbound generosity to charities across Canada and around the world,” she wrote. “Their dedication to service and philanthropy impacted many people, some of whom have shared their beautiful and inspiring stories with me.

“The horrific manner in which they were taken from us has been extremely traumatic and has irreparably damaged the fabric of our community.”

She implored anyone with information that may help solve the killings to come forward.

“Toronto Police Service Homicide Unit continues to pursue its ongoing and active investigation. The $10 million reward for information leading to a conviction remains available and is still unclaimed,” Krawczyk said. “If you have any information about the murders of my parents, I urge you to please contact the Toronto Police Service at shermantips@torontopolice.on.ca. Your information is urgently needed to help solve this crime and bring those responsible to justice.”

The federal Liberals are withdrawing a controversial amendment to their guns bill that would have added many popular hunting rifles and shotguns to a list of prohibited firearms in Canada.

Canada's egg industry appears to be quietly sidestepping widespread shortages and wildly spiking prices affecting other countries, and some say supply management is to thank.

Most of Ontario is under an extreme cold warning as a blast of Arctic air delivers biting wind chills.

Lives were 'shattered' when Kabul fell into Taliban hands, and thousands remain in limbo, unable to return to Afghanistan. CTV News' Genevieve Beauchemin recalls her visit to makeshift refugee camps set up in Pakistani parks, and the stories she heard during that time.