TORONTO -- A 95-year-old woman was discharged from an Ontario hospital on Monday to the cheers of staff and health-care workers after recovering from COVID-19.

Ruth Barmash lives on her own and is described by her grandson as being incredibly independent and active. A personal support worker visits once a day to help with some basic activities, but otherwise her grandson says Barmash is quite active—going to get her nails and hair done once a week pre-pandemic.

“She calls herself a tough old broad,” her grandson William Silverstein told CTV News Toronto. “She’s quite a special lady.”

Silverstein, who is an internal medicine resident at Sunnybrook Hospital and was part of the group that admitted the first case of the novel coronavirus in Canada, said that his grandmother began to experience symptoms in late April. He said she had a fever, a slight cough and fatigue.

He said she was managing the symptoms and the fever broke, but then the family was called by Toronto Public Health five days later informing them that Barmash may have come into contact with someone who was positive for COVID-19.

She was told to isolate for 14 days and Silverstein said the family treated her as if she had the disease and hoped for the best.

At the beginning of May, Barmash’s fever reappeared and she became extremely weak. The family called paramedics and she was taken to Sunnybrook Hospital, where she remained until May 11. It was there she tested positive for COVID-19.

Silverstein said it was tough knowing that his grandmother was in the hospital and that his family could not see her.

“It is really hard, especially for those elderly patients, to unfortunately have to be alone in the hospital, but the team here made her feel loved as much as you can hope.” 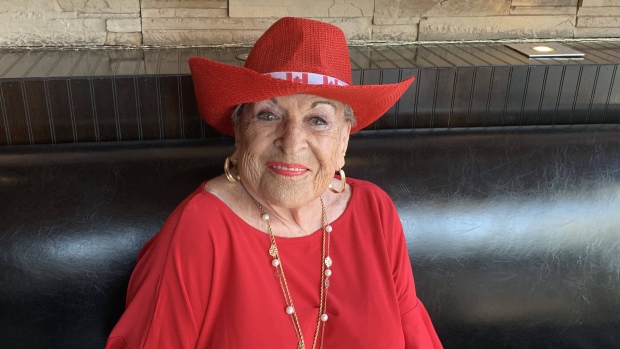 The staff at Sunnybrook made sure that Barmash had an iPad and a phone in her room so that she could speak with her family, Silverstein said, and allowed him to drop off some of her belongings. He added that people working in the hospital gift shop brought Barmash a package from her family on Mother’s Day.

“Everyone involved is just so kind and (the pandemic) is really bringing out the best in healthcare,” he said. “It’s just a very strange time but … this is why you go into medicine in the first place. All things considered I can’t complain. I am very grateful to do this work.”

On Monday, Barmash was discharged from the hospital. Silverstein captured the moment on video, showing his grandmother being wheeled out on a stretcher, waving to the staff who are all clapping and cheering.

95 and feeling alive!!!!! So grateful to all the amazing staff at @Sunnybrook for the world class care they provided to my grandmother as she took on #COVID19. Thank you x100000000000 pic.twitter.com/Yu0hhZXSHm

Barmash still needs to go to rehab to receive further care, but Silverstein said the doctors have given her a “clean bill of health.”

Silverstein added that she appeared to be back to her regular, spirited self.

“I asked her the other day, ‘Bubbe, how are things?’ She said ‘I only have two complaints. The coffee sucked and the chicken nuggets were cold.’”