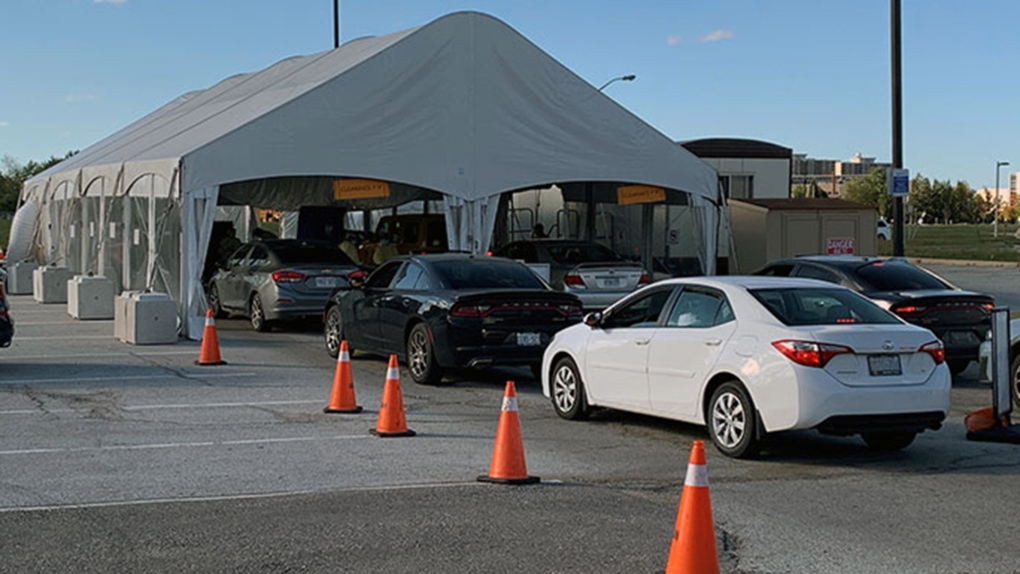 TORONTO -- The four neighbourhoods with the highest COVID-19 positivity rates in the entire province last week were all located in Peel Region, where nearly 12 per cent of all tests are now coming back positive.

The Toronto-based research group ICES has released another batch of data for the week ending Nov. 14 and it reveals that Peel continues to be home to some of the hardest-hit neighbourhoods when it comes to the spread of COVID-19.

The data is based on the first three letters of the postal codes for all Ontarians who were tested for COVID-19 from Nov. 8-14.

It shows that one neighbourhood in Brampton’s far northeast corner that is bound by Queen Street to the south, Mayfield Road to the north, Highway 50 to the east and Airport Road to the west had a positivity rate of 20.1 per cent, up from 19 per cent the previous week when it also topped the list.

Meanwhile, another Brampton neighbourhood immediately to the west of that area had the fourth worst positivity rate in the province at 16.9 per cent.

All told, the four neighbourhoods with the highest positivity percentages between Nov. 8 and 14 were all located in Peel Region – two were in Brampton, one was in Mississauga’s Malton neighbourhood and another was in the area to the south of Pearson International Airport.

The highest positivity rate in Toronto was in the Thorncliffe Park neighbourhood, where 16.3 per cent of tests came back positive.

Speaking with CP24 earlier this week following the release of another batch of data from ICES, infectious diseases specialist Dr. Abdu Sharkawy said that whenever the positivity rate creeps up to five per cent in a given region there is a “very high risk of exponential growth.”

He said to see rates up around 20 per cent in some areas is shocking.

“That is a staggering number and suggests that there is a huge problem that is going to lead to serious health consequences and people are going to unfortunately die,” he warned.

Officials in Peel have previously said that there are some neighbourhoods in the region that are seeing much higher positivity rates due to a higher prevalence of essential workers, specifically northeast Brampton.

The overall provincial average was 4.2 per cent.

“Action has been taken, they have been under restrictions since October 10 but it is clear that we have to consider what next to do because the numbers are still continuing to grow rapidly,” Health Minister Christine Elliott said when asked about the latest positivity data on Thursday. “Peel is the most problematic region right now, Toronto as well so we are looking at those areas with particular concern and trying to determine what needs to be done but I think it is also really important for everyone to remember we all have a role to play. We need everyone to please follow the public health measures that we have talked about since the beginning of this pandemic.”

Among the 50 neighbourhoods with the highest positivity rates, 22 were in Toronto, 17 were in Peel, seven were in York, two were in Durham, one was in Halton and one was in Windsor-Essex. 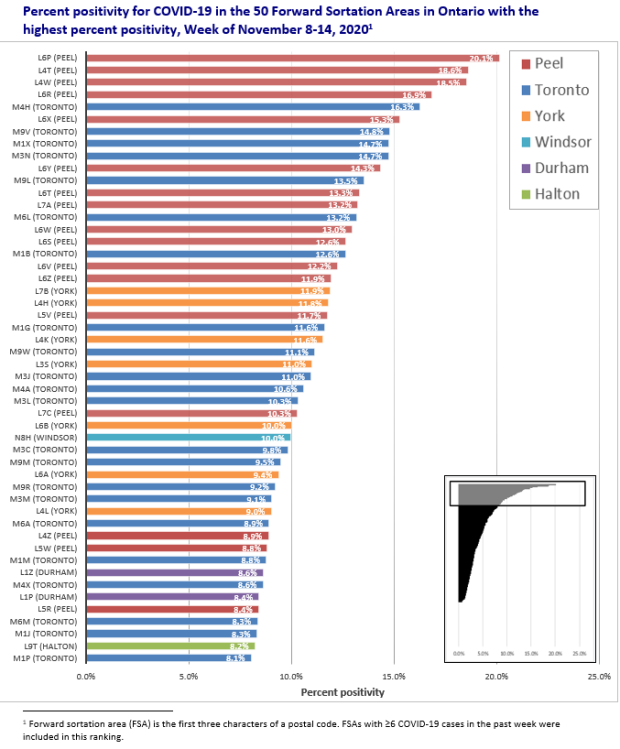