When it comes to the "unprecedented" disruption facing Torontonians with the construction of the Ontario Line, the city and province will "do better" to support impacted businesses than those affected by the Eglinton Crosstown construction, Mayor John Tory said.

"It is a subject of huge concern to me," Tory said about the disruption to local businesses.

He said the intersection of Queen and Yonge streets, in the heart of the downtown core, is expected to be closed for years due to the project.

Tory acknowledged the pain businesses have suffered along Eglinton Avenue due to the LRT construction and vowed to "do better" when it comes to taking care of businesses along the Ontario Line.

"I think the first thing we've done is to be straight up with people... there is going to be disruption. And we simply have to get it built."

Ford said public consultation will continue with businesses during the construction process.

"We've consulted with business owners up and down the line and we are going to be there to support them," Ford said.

The 15-stop subway line is expected to run from Exhibition Place, through the downtown core, and finally to the Ontario Science Centre. 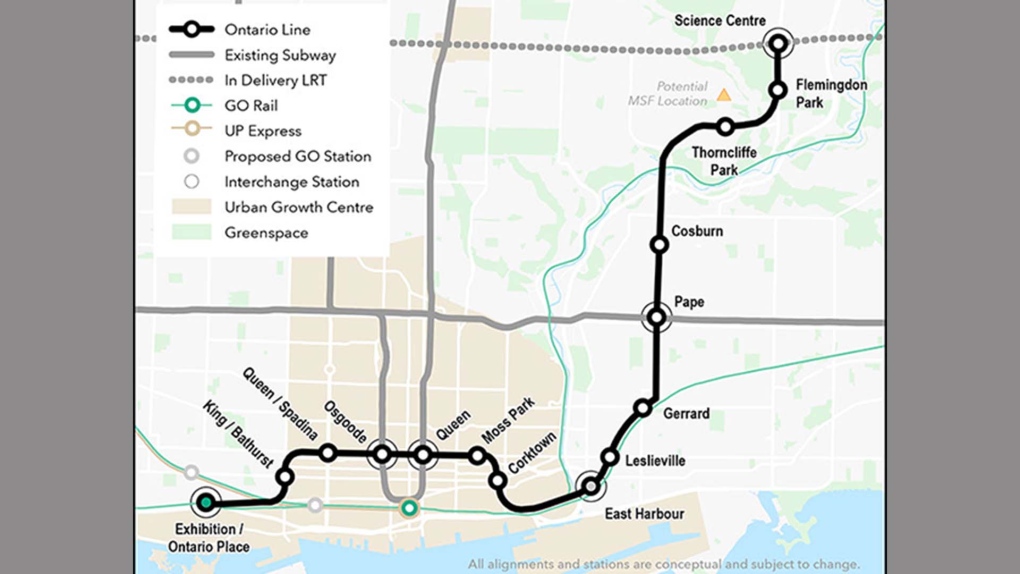 A proposed map of the Ontario Line is pictured. (Metrolinx)

Metrolinx says the capital costs associated with the project are $10.9 billion and the province has previously said that the new transit line is projected to be operational by 2030. Speaking to reporters on Sunday, Phil Verster, the president and CEO of Metrolinx, would not confirm if that is still the projected date for opening the subway line.

"For decades, governments of every stripe have been talking about the need for new subways in the GTA," Ford said Sunday.

"Finally we are the government that got it done. Today we are getting shovels in the ground on this once-in-a-lifetime project."

Ford said the subway line is expected to generate $11 billion in economic benefits for the City of Toronto and the GTA and will significantly reduce congestion on the current subway system.

"We want to see any end to the overcrowded subway stations and subway cars," Ford said.

The national security adviser to Prime Minister Justin Trudeau says that senior officials are planning ahead for the possibility of another 'Freedom Convoy' protest in early 2023.

Alberta’s deputy premier says the proposed sovereignty act does not grant cabinet unilateral power to rewrite laws behind closed doors, but amendments may be needed to clear that up.

Only one in five Canadians are aware that a person with HIV can't sexually transmit the disease if they are taking the proper medication, according to a new survey that suggests Canadians still have a long way to go in understanding the medical and social realities of HIV.