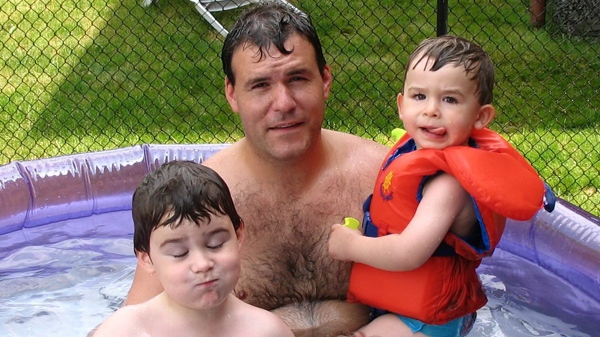 Stephen Watkins and his sons Alexander (left) and Christopher are shown in a family handout photo. (THE CANADIAN PRESS / HO-Stephen Watkins)

TORONTO - For nearly two years, Stephen Watkins' life has been on hold.

Since March 6, 2009, he has been frantically searching for his two missing sons.

"The last 23 months have been my worst nightmare," he says. "Their whereabouts plague me every minute of every day."

Police believe the two boys -- Alexander, then 7, and Christopher, 4 -- were abducted to Europe by their non-custodial mother Edyta Watkins.

Stephen Watkins says he's been in agony ever since.

"Are they being cared for? What's happening in their lives? Do they know that I'm still looking for them?" the 39-year old father from Newmarket, Ont., said Tuesday.

York Regional Police allege Edyta Watkins' father, Thaddeus Ustaszewski, drove her and her sons across the border into the United States.

The 37-year-old woman and her sons boarded a plane from Rochester to Detroit and then to Frankfurt, Germany, said Det. Const. Jesse Mann.

A Canada-wide arrest warrant for abduction has been issued for her, and her name appears on the RCMP's most wanted list.

Watkins says he's puzzled how his ex-wife could leave the country with the kids. He says her passport was cancelled after she failed to pay child support.

But prior to June 1, 2009, a Canadian citizen could cross the U.S. border on land using just a driver's licence and a birth certificate.

Edyta Watkins also could have been using a different passport, said Ferreira.

Ustaszewski is before the courts, accused of assisting with the alleged abduction, and there are Interpol alerts in place to notify police agencies around the world about the missing boys.

Stephen Watkins has launched an extensive social media campaign to spread the word. His website offers photos of the boys and translations in numerous languages.

"I'm probably the most proactively searching parent in Canada," he said. "I've got to fight to find them."

He says his ex-wife was suffering from post-partum depression and became abusive towards him six months after giving birth to their first child.

He says the kids were being physically and emotionally abused by their mother.

He says a court granted him custody, with his ex-wife having access to the children on weekends.

Watkins, who has not worked for the past two years, used to be an advertising manager but switched to a manual labour job to help cope with the stress of his custody battles.

He says he became suspicious when he found out his ex-wife had been taking the kids to Polish school and refused to hand over the boys' passports, despite court orders.

Watkins says he took every step possible to prevent the alleged abduction. When he received a phone call from the boys' school that Monday saying they were absent, it came as a bit of a shock.

There's no extradition treaty with Poland, so if Edyta Watkins is arrested the matter will go to the international courts at the Hague, said Mann.

Meanwhile, Ustaszewski, who is charged with aiding and abetting the alleged abduction, is scheduled to appear in a Newmarket court on Feb. 25 to set a trial date.

"York Regional Police will continue the investigation until the boys are located," said Mann.

He and Watkins remain hopeful they will be found.

"I get emotional, but I'm trying to focus my energy on finding my sons and making people aware," said Watkins. "That's my motivation, to make sure that they're safe and bring them home."