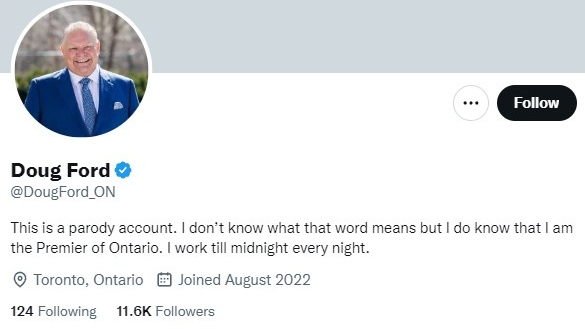 The account with the handle @DougFord_ON was given a blue verified checkmark over the last few days along with a number of other accounts that presumably paid for Twitter Blue, a new subscription service.

Now, under the new leadership of Elon Musk, anyone who pays about $8 a month can receive a blue checkmark.

The parody account spoofing the Ontario premier was created in August and used the same photograph as Ford's official account.

Prior to the account’s suspension Friday evening, tweets had been published sporadically since it was activated, but in the last 24 hours there had been nearly two dozen posts.

CTV News Toronto has reached out to the Premier’s Office for comment.

On Thursday, Elon Musk tweeted that any parody account must include the word “parody” in their name and not just their bio.

“To be more precise, accounts doing parody impersonations. Basically, tricking people is not ok,” he said.

As of late Friday morning, the Twitter account DougFord_ON did not indicate it was a parody in the name. It did, however, indicate it is a parody account in the description.

There is also a certified parody account of Ontario Chief Medical Officer of Health Dr. Kieran Moore that has not been suspended at time of writing. The user created the account sometime in the last 11 days.

The description says it is a parody, indicating the account is for “what I wish Dr. Moore would say and do.”

Thank you for your support everyone. My plunge into the parody pool has been illuminating but very time consuming. I have to get back to work. Signing off…. For now.

Thank you to all our veterans and active military personnel and their families. 🌺🌺🌺

Experts have expressed concern about the new subscription-based blue checkmarks could create confusion and that some people may interpret information posted by those accounts as authentic.

Prior to the new subscription service, there were about 430,000 verified accounts on Twitter.

Twitter has begun to roll out alternative grey checkmarks to news outlets and public officials to separate them from the blue checkmarks. So far, the premier has not been given this classification.

With files from the Associated Press