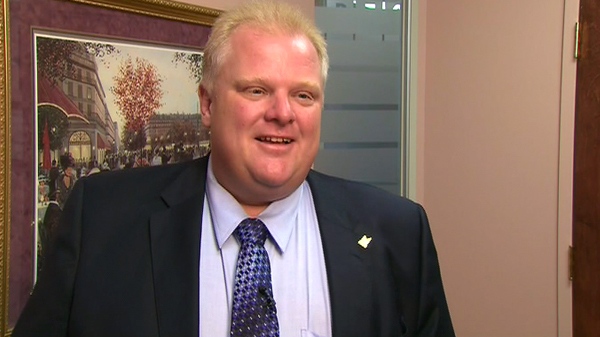 Rob Ford credited his campaign team for his surge in popularity in a new poll released April 16, 2010.

Rob Ford's mayoral campaign hit a snag Thursday after a miscommunication forced his staff to issue a reversal on the thorny issue of free parking and other perks for city staff.

Responding to the vote, Ford's campaign team issued a press release that slammed councillors for appealing the CRA's ruling.

"The Taxpayers finally won a victory at City Hall," said Ford's release, "but some of my colleagues won't give up their entitlements without a fight. This proves once again that City Hall is completely out of touch with the public and that big changes are needed."

However, on Thursday afternoon, a Ford spokesman told ctvtoronto.ca that the mayoral candidate had in fact voted in favour of the motion to appeal the CRA's decision.

"Rob fully supported the motion and it was a unanimous motion," said spokesman Fraser Macdonald.

Macdonald said that Ford does not want to cutbacks on city staff, and he simply wants councillors to lead by example.

Macdonald blamed the mix-up over the vote on a miscommunication.

The source of the confusion appears to lay in the distinction between which perks councillors receive and those that city staff receives.

A recent CRA audit found that councillors' free access to the TTC, the Toronto Zoo and city-run golf courses are a taxable benefit.

Council has also agreed to cover the costs of any retroactive tax and interest that city staff incur between 2006 and 2010 as a result of the CRA's decision to make parking permits a taxable benefit.

While councillors enjoy the tax-free benefit, the CRA has ruled that staff members must pay retroactive tax and interest for the opportunity to park at City Hall, Metro Hall, the North York, Scarborough and East York Civic Centres as well as 111 Wellesley Street.

Staff must file an objection to the CRA by the end of June in order to be eligible for the city's reimbursement program.

The cost of covering the expense for all 1,746 employees is estimated to be around $5.95 million. It will be funded from the Benefits Reserve Fund.

"Many employees never used the parking, or only on very rare occasions when they required their vehicle for work," the city said in a news release Thursday.

"Employees were not required to keep any records or logs to demonstrate the business use," the release goes on to say. "However, the CRA has chosen to base its reassessments on the mere ‘opportunity' to park and not actual usage."

If the city's appeal is successful, then staff members must reimburse the city the money used to cover their taxes.

The city said that the reassessment will also impact employees' contributory earnings in their retirement program.

"As a result, both the city and the employees will have to make additional contributions," the news release says.

The CRA has said that councillors will not be taxed on their parking permits or their $53,100 office expense budget.