TORONTO -- The City of Toronto has ordered the owners of home that built a deck facing directly into their neighbour's bedroom to stop work and either remove the structure or apply for a building permit.

High Park resident MJ Crawford, whose bedroom the deck faces in on, told CTV News Toronto she noticed the platform went up about a year ago and it is now affecting the way she lives.

"I like for the light to come in through the window, so I'll open my blinds, forget there's a deck there and I'll look up and I'll see some guys looking at me," Crawford said on Wednesday, adding that she had been caught by the construction workers at the property several times at various stages of undress.

"There's not a ton of activity there unless it’s the contractors," Crawford said, referring to the ongoing renovations at the property near High Park Boulevard and Indian Road.

Crawford filed a complaint with the City of Toronto, who confirmed they were looking into the matter. On Friday, the city told to CTV News Toronto they visited the property and issued an order to stop work on the deck. 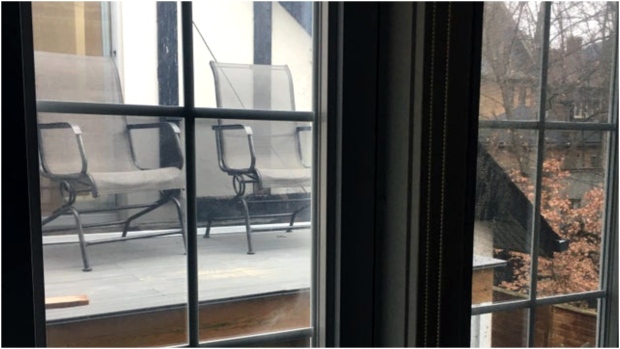 "A building inspector conducted a site visit the morning of Thursday January 16 and found that an existing deck was in the process of being reconstructed," the city said in a statement.

"The property owner can decide to remove the structure or apply for a building permit. During the building permit application process, staff will review the plans against the current zoning and Ontario Building Code in order to determine what would be permitted."

"I at least feel happy there is some resolution,” Crawford told CTV News Toronto on Friday. "It's a bit creepy but it’s mostly just annoying that my windows have been unusable."

Crawford said she’s tried to find some humour in her predicament.

"Definitely time to upgrade the blinds."