TORONTO -- A Toronto church community is giving tents to the city's homeless population amid calls for the City of Toronto to ramp up its efforts moving the homeless population into housing, shelters and respite centres so people can physically distance and isolate during the pandemic.

The city tells CTV News Toronto there are now 40 confirmed cases of COVID-19 in the shelter system, which sees as many as 7,000 people every night.

The city has said it expects to create close to 2,000 spaces in hotels and community centres for people during the pandemic by the end of April. The city said Tuesday that more than 1,000 have been moved.

On Wednesday, a group of about a dozen doctors, nurses and homeless advocates held a physically-distanced protest at City Hall, saying the system is too crowded and the relocation of people is happening too slowly. 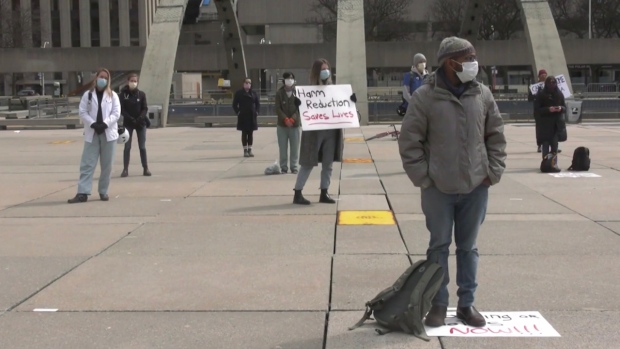 Church and outreach group Sanctuary Toronto is collecting tent donations and taking the unusual step of letting people stay on their property.

“We are encouraging physical distancing as much as we can and we also know that what we are doing is much better than people sleeping inches or two and half feet apart,” said Sanctuary Street Pastor Doug Johnson Hatlem.

Toronto residents Romeo Pratt and Nikki Renaud say they had a place to stay and use the washroom until a recent misunderstanding forced them out. They said they then went to a park but were told to move so they got a tent and set up at Sanctuary.

“You’re free and scared at the same time,” said Pratt.

“How are we supposed to self isolate? It’s hard to because there are people everywhere. I understand people’s situation. They have nowhere to go,” Renaud said.

“So far, [moving] 1,000 people and doing it in a sensitive manner that takes into account that many of these people are vulnerable with very special issues facing them, not just that they have to be moved from one place to another. I think this is a very significant accomplishment,” he said.

Pastor Doug Johnson Hatlem said the lack of movement into hotels and other centres is also having a ripple effect on what he called virus-related deaths.

He said within the past week there have been five deaths connected to the organization. Out of this five, one person was tested for COVID-19, but the results have not come in.

“Some of the other ones (deaths) are about overdoses that may not have happened if it wasn’t for COVID-19, there’s a lot less response to it (the overdoses), and one of them is about where they were sleeping and got by hit by a train, so it’s very much related to COVID-19, even if those these aren’t people with COVID-19,” Johnson Hatlem said.

He said the organization interacts with up to 400 people a week who are dealing with everything from a loss of panhandling revenue, to not being able to use cash at the LCBO to accessing resources because of the pandemic.