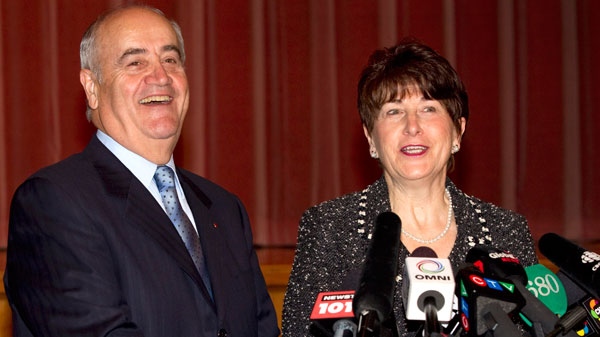 Julian Fantino laughs with his wife Liviana after announcing his intention to run for federal Parliament in a news conference in Woodbridge, Ontario on Tuesday October 12, 2010. (Frank Gunn / THE CANADIAN PRESS)

TORONTO - The Harper government's bet that a controversial, tough-talking former top cop is just the kind of candidate to wrest away a Toronto-area Liberal stronghold is being put to the test in next week's byelections.

Julian Fantino's ascent through the ranks put him at the helm of the London, Ont., York Region and Toronto police forces, with his 40-year policing career culminating in the Ontario Provincial Police commissioner's chair.

Those years on the rise were also filled controversy, including unproven allegations of wiretapping, a private charge of influencing municipal officials -- which was thrown out -- and lingering accusations he's to blame for two-tier policing of a contentious aboriginal occupation.

On Monday voters in Vaughan, a riding held by the Liberals since 1988, will decide if Fantino the political aspirant is headed to Ottawa.

Byelections will also be held Monday in the Dauphin-Swan River-Marquette and Winnipeg North ridings in Manitoba.

The Canadian Press made a number of requests to interview Fantino but he was not made available.

Fantino's kept a low profile during the campaign and missed every live public debate, including one Tuesday evening.

Instead, he faced off with Liberal Tony Genco and other candidates earlier in the day in a taped debate for Rogers TV, to be broadcast in York region, where Vaughan is located.

That strategy is pushing Fantino's track record as a police officer to the forefront, said Henry Jacek, a politics professor at McMaster University.

It's also a move Jacek said could make or break his bid.

"I would say that if Fantino wins, given the fact that this has been a Liberal seat, this will be a big victory for Stephen Harper and yet another blow against Michael Ignatieff and the federal Liberal party," he said.

The Tories probably think their candidate is "so high-profile, that people know him, that they respect him, people think he's a leader, and that outweighs any disadvantages there may be from controversial statements he's made," he said.

But Fantino's top cop image could backfire, Jacek added, if it causes voters to doubt his ability to handle issues outside law enforcement.

"If you ask people what worries them, they mention things like health care, they mention economic security, the economic conditions, and law and order and crime actually rank fairly low," Jacek said.

"A lot of voters will probably want him to speak on these other issues, like health care, like economic security."

Still, the aboriginal occupation is likely to weigh heavily on voters' minds, he said.

"I think there will be Conservatives who are going to stay home or, in fact, even vote for the Liberals because they're upset with the way he handled the Caledonia criminal law crisis."

When Fantino took command of the provincial force in 2006 he inherited the explosive Caledonia file.

Earlier that year, Six Nations protesters occupied a housing development on the outskirts of Caledonia, Ont. When police stormed the site several weeks later it sparked a violent standoff.

Ontario Provincial Police officers were tasked with keeping the peace through a number of ugly clashes between the aboriginal protesters and the citizens of Caledonia.

A Conservative group calling itself Against Fantino is protesting against Fantino's campaign over his handling of the occupation. The group is led by Gary McHale, an activist who has butted heads with Fantino repeatedly over policing at the site.

Caledonia residents collected more than 4,000 signatures on a petition calling for a public inquiry into his actions, accusing him of favouring aboriginal occupiers. The provincial government last year ruled against an inquiry and said it's up to Ottawa to resolve the land claim dispute at the heart of the conflict.

McHale also filed a private information against Fantino which resulted in the then-commissioner facing one count of influencing or attempting to influence municipal officials. McHale alleged that Fantino instructed the mayor and councillors in Caledonia -- in an April 2007 email -- not to attend McHale's rallies.

Those charges were eventually withdrawn by the Crown.

Fantino, 68, has stirred controversy throughout his career.

While still a staff inspector in 1989, he released statistics suggesting black people are behind most of the crime in Toronto's Jane-Finch neighbourhood. He later apologized, but said his mistake was to release the data in front of a reporter.

He was also accused of taking part in wiretapping a close friend of the head of the Toronto Police Services Board while he was on the force in the early 1990s. He has consistently denied the allegations, which were never formalized.

Critics called for his dismissal in 2008 after the release of wiretapped conversations between him and Ontario aboriginal activist Shawn Brant.

Fantino was recently embroiled in a messy internal disciplinary hearing that stretched over two years and saw him accused of vindictiveness and witness tampering. The hearing came to an abrupt close last year when police prosecutors dropped misconduct charges against the two officers named in the case.

These incidents add to Fantino's "controversial persona, and certainly there may be some people who think he's too controversial," Jacek said.

"Other people may just view him as a tough, frank, candid person and they may not be bothered at all."