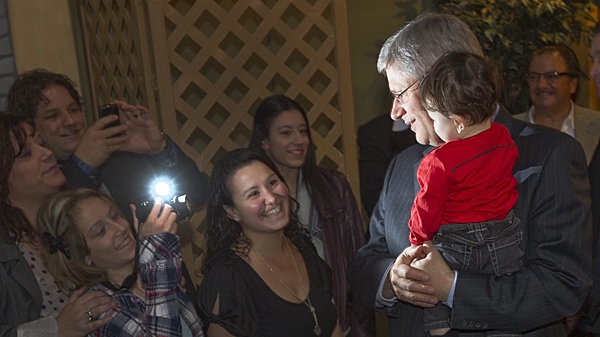 Harper told a crowd gathered for an unrelated announcement in Woodbridge, Ont., that he is honoured the former provincial police commissioner will be running for the party.

Fantino says he will seek the Tory nomination in an upcoming byelection in Vaughan.

Harper didn't say what role Fantino might play in government, if he is successful.

Fantino is widely seen as cabinet material and supports Harper in his battle to scrap the federal gun registry, despite the many police associations who've said they want to keep the registry.

Fantino sat in front of Harper as he launched a new business innovation program to boost private sector startup investment.

Afterwards, the two went to lunch together to discuss "local issues."

A date for the Vaughan byelection has not yet been set.

"(Fantino) obviously illustrates the deep support that our government has throughout the law enforcement community for some of the things we've undertaken," Harper said Friday.

Outside the building, Fantino said Harper has always advanced the law and order agenda, which appeals to him.

"He's been very connected to the law enforcement community and public safety issues in this country and that's one of the reasons going forward I can make a contribution," said Fantino.