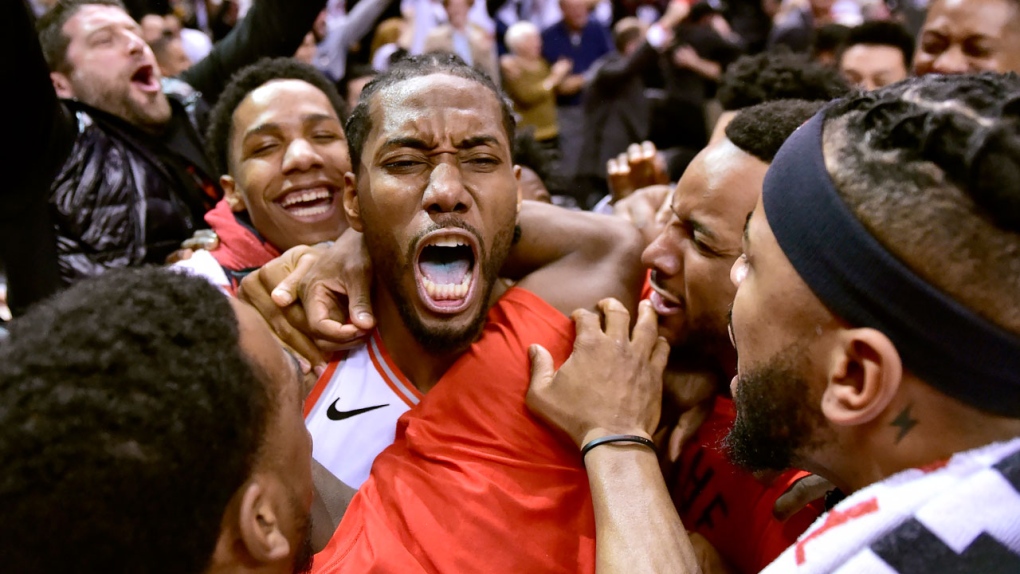 Toronto Raptors forward Kawhi Leonard (2) celebrates his last-second basket at the end of second half NBA Eastern Conference semifinal action against the Philadelphia 76ers, in Toronto on Sunday, May 12, 2019. THE CANADIAN PRESS/Frank Gunn

If Dolly Kambo couldn't see Kawhi Leonard sink a legendary shot for her favourite sports team in person, then watching him do it from a relative's wedding was the next best thing.

The 49-year-old was one of many eager Toronto Raptors fans not-so-subtly checking their phones for word of the team's Game 7 showdown with the Philadelphia 76ers during speeches honouring the nuptials for her sister-in-law's daughter.

When one of the masters of ceremonies noticed that Kambo was not alone, he obligingly plugged in his laptop and aired the last few seconds of the game on large screens originally intended for slide shows and family photos.

It was in those final seconds that Leonard sank the buzzer-beating game-winning shot, and Kambo said his heroics on the court helped turn up the wedding celebrations to a whole other level.

"It was so loud," Kambo said of the gleeful shrieks that erupted in the Brampton, Ont., reception hall after Leonard's shot finally bounced in. "Everybody came to the dance floor. Everybody forgot that it was a wedding reception and were just loud and cheering. It was like we were in the arena itself."

Kambo admitted to some trepidation when she learned a decisive playoff match was set to take place at the same time as the reception for the Punjabi wedding, which had featured the actual marriage ceremony the day before.

The resident of Guelph, Ont., who had shelled out for playoff tickets to attend Game 4 against the 76ers in person, even toyed with skipping the reception to take in Sunday's match at home, but didn't want to slight her family and friends.

In anticipation of the big game, however, Kambo's son urged her to download the Raptors official app so she could keep an eye on things from afar. Based on what she saw around her, Kambo said many of her fellow guests had a similar plan.

"Speeches were happening and all that stuff, but a lot of people had their phones out," she said.

Kambo presumes the newlyweds' relatives overseeing the reception noticed the same thing, which may have been what led one of them to connect his laptop and broadcast what initially seemed like the closing seconds of a tied game.

She said it was nothing more than luck that allowed them to tune in for not only the critical seconds of the matchup, but for what promises to go down as a seminal moment in Raptors history.

With seconds left in regulation play, Leonard let loose a high-arcing Hail Mary shot that bounced around the rim four times before finally landing and securing a 92-90 win for the team.

That victory clinched the Raptors a spot in the Eastern Conference finals, where they will face off against the Milwaukee Bucks starting on Wednesday.

Kambo will be eagerly watching the Raptor's next playoff showdown, but said the unusual setting in which she watched the team's most recent win gives the experience a unique flavour she'll always relish.

"I can't tell you how happy we were," she said. "It was just fantastic last night."