TORONTO -- An Indigenous and human rights lawyer is calling an assignment for Grade 7 students sent out by a teacher in the Hamilton-Wentworth Catholic District School Board discriminatory.

The project asked students to write a speech pretending to be a French colonist.

“You are going to create a speech (as the French colonists) to convince the aboriginal people to let you stay on their land,” the assignment stated.

“The more convincing you are the better your mark will be,” the assignment went on to say.

“It’s horrible. There’s no other word for it other than to describe it’s you know, discriminatory towards Indigenous students,” said Naomi Sayers, an Indigenous lawyer in Sault Ste. Marie who focuses on human rights.

“So what’s going to happen here is that Indigenous students are not going to feel valued, heard, listened to. You can talk about the history of colonization in Canada, but you don’t have to force somebody to act as a colonizer or to defend a colonizer to receive a good grade,” Sayers said. 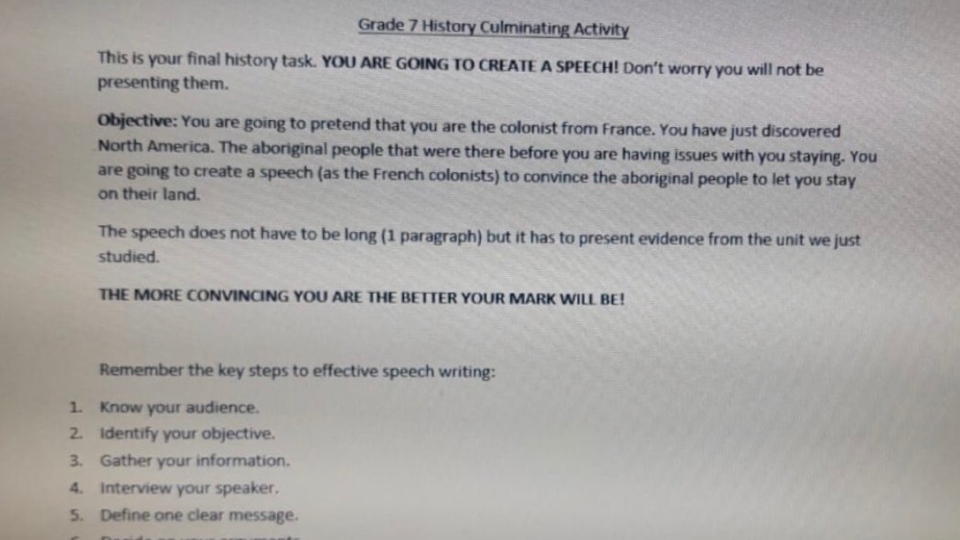 Patrick Daly, the Chair of the Board of Trustees with the Hamilton-Wentworth Catholic District School Board, told CTV News Toronto on Monday the end of year assignment went out on Thursday and on Friday a parent expressed concern with the teacher.

“The teacher acknowledged the concern and then yesterday when I became aware of it, on behalf of the board, indicated that clearly, you know, we saw the assignment as insensitive and inappropriate,” Daly said.

“We know we have more to do to eradicate racism it all its forms, and I think this is clearly unintentional on the teacher’s part but clearly another sign we all need to do much much more.”

Daly said the teacher has learned from the experience.

“We have an outstanding Indigenous education lead that will be working with the teacher, and not only that teacher, but again to ensure our entire system is well aware of the concern.”

Sayers said the project lacked historical context and created the idea that Indigenous were not welcoming, adding there are stories about how treaties were formed in south-western Ontario and the intent to share land.

Sayers said she would like to see teachers coached on better lesson plans and have a responsibility to create an environment free of discrimination.

“Let’s look at the source as to where the teachers are obtaining these lesson plans and look to that instead,” she said.