A residential street in North York got a makeover this weekend as part of a five-day pilot project aimed at increasing safety for pedestrians and cyclists.

Several volunteers came to the neighbourhood Sunday afternoon using planters, planks and paint to transform Pineway Boulevard, which has been the focus of many traffic complaints by residents over the past year.

Sarah Fernandez, who has lived on Pineway Boulevard for more than 30 years, said the street has always had several issues.

“People use it as a shortcut to get across between Finch and Cummer [avenues],” she said. "The volume and the speed have increased tremendously.”

She’s petitioned the city to get speed bumps installed, so she’s not sure if the newly colourful painted planter boxes and narrower streets are the solution.

“I’m a bit skeptical about this pilot project, but I’m prepared to give it a try,” she said. 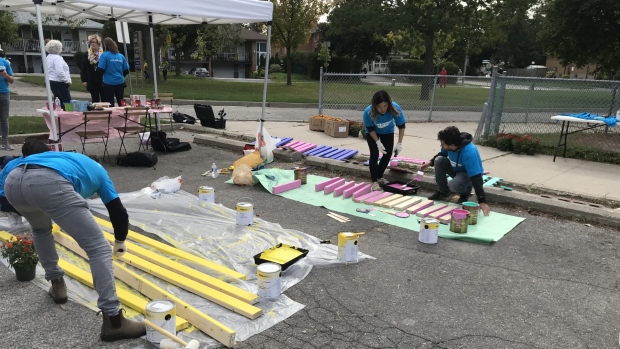 Eric and Julie Tai have lived on the street for three years with their son, who is in senior kindergarten at Pineway Public School.

They said that they too are concerned about the traffic, but feel a little more encouraged by the project.

“We’ve noticed a lot of vehicles [that] are driving extremely fast [and] above the speed limit in the neighbourhood. There are a lot of people walking that are all ages," Julie told CTV News Toronto.

“We’re really concerned for the safety of the pedestrians, and we’d really like to see cars slow down and take their time.”

Shelley Carroll, the local councillor, helped the crew of volunteers with painting and assembling planks.

She also spoke to residents about their concerns over traffic. She said the city knows the street needs some kind of redesign, and that this project will help.

“Rather than [having] a long [environmental assessment], and [trying to] theorize about what we should do, 8 80 cities is … physically [altering] the roads with some fun planters and paint on the road," she said.

Carroll said city staff will use the data to figure out what helps.

Amanda O’Rourke, the executive director of 8 80, said her organization is trying to make streets safer for everyone, and shaking up the city’s focus on cars.

“Torontonians are hungry for these kinds of interventions on our streets,” she said. “People want to see the streets not just [for] cars, but be safe and comfortable places for everyone.”

When the planters were ready and the paint dried, the volunteers placed them at predetermined points up and down Pineway Boulevard.

They’ll stay there until Thursday, and the group and city will be watching to see how drivers adjust their habits.