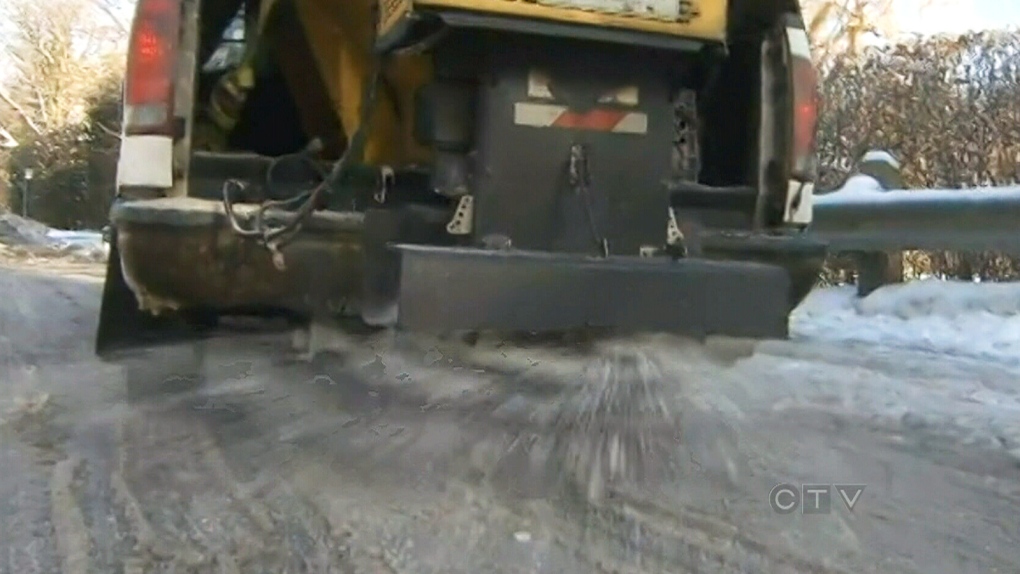 Over the last five years, Toronto salt trucks have used a sugar beet by-product mixed with traditional rock salt when the temperature dips below -20C.

Across the city, Toronto salt trucks are working with an usual recipe for keeping streets clear of ice.

When temperatures dip as low as they are now, sodium chloride typically used as "road salt" can freeze. That means the city has to look for alternatives.

Beet juice is one, as it works at temperatures where salt brines are no longer effective. Over the last five years, city salt trucks have used a sugar beet by-product mixed with traditional rock salt when the temperature dips below -20C.

"It's probably the only thing that will work," Eco Solutions manager Antonio Vaccari told CTV Toronto.

According to Vaccari, the mixture of Eco Solutions' Fusion Liquid De-icer and rock salt can melt ice at temperatures of at least -30C. The product also reduces the bounce and scatter of any salt dropped on the road afterwards, the manufacturer claims.

The usual salt brine in the city's salt trucks was replaced Monday night, with the dark brown beet juice product, in preparation for the cold snap that took hold overnight.

The beet juice moistens rock salt, creating a tacky and heavy substance that causes it to stick to ice and snow on roads.

"The upfront cost per litre is more than most products," but trucks use less than traditional brine, Vaccari said. "And it works."

Municipal salt trucks in Hamilton, Kitchener, Cambridge and Guelph have been using the natural de-icing product for years.

When sugar is extracted from sugar beets for food use, it leaves behind a molasses-type by-product which is brought to Milton, Ont., where Eco Solutions turns it into de-icer. It's bio-degradable, and water soluble.

The smell has been described as similar to burnt coffee or soya sauce, and it subsides after a few hours. And, "you can drink it," Vaccari said. Though he doesn't recommend it, it's safe for consumption.

Other alternatives to road salt

Hundreds of Ontario plow operators are trying to use less, since sodium chloride is expensive and hard on the environment. Here are some other alternatives:

Do you have any unique ways to melt ice? Let us know in the comments below.