TORONTO -- A city councillor says that it might be time to reconsider Toronto’s ActiveTO program amid data suggesting that the popular weekend road closures have significantly increased driving times.

The city began closing some major arteries to vehicles on weekends last spring as a way to create more room for pedestrians and cyclists during the COVID-19 pandemic.

But it also resulted in longer driving times. In fact, city data has suggested that commute times along the Gardiner Expressway and Queensway are two to three times longer when the closure along Lake Shore Boulevard West is in place.

In an interview with CP24 on Sunday morning, Etobicoke North Coun. Michael Ford said that he believes ActiveTO did have some “merit” when the city was largely shut down due to the COVID-19 pandemic but he said that with restrictions lifting and traffic building back up on city streets it may have run its course.

“As we are opening up our city and brining people into the downtown core, we have sporting events happening, I think we have to have a second look at this and I would say bring it to an end,” he said, noting that he plans to raise his concerns with Mayor John Tory.

Data released by the city last month suggested that between 16,700 and 34,000 cyclists and 2,800 to 5,000 pedestrians have used the most popular closure along Lake Shore West Boulevard on the days when it has been in place.

That actually surpasses the 15,500 to 24,200 vehicles that travel along the road on weekend days that the closure is not in place. 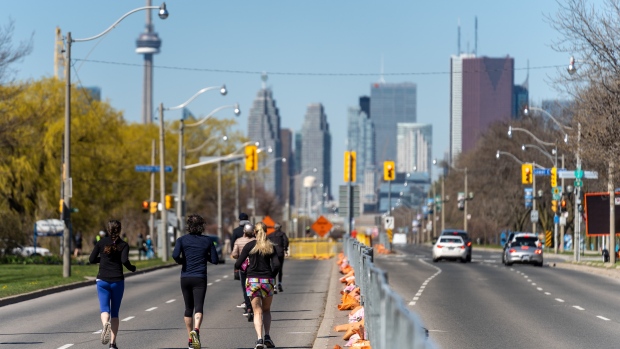 Ford, however, said that he believes there is still adequate space for cyclists and pedestrians along popular routes like the Martin Goodman Trail and that there is no need to regularly close major arteries.

“I think there's tons of space out there to hold the demand for cycling and I encourage people to get out and enjoy our city, get on bikes and take advantage of that. But look we need to have a balanced approach,” he said. “As we continue to open up and as we go into September we want people coming into our downtown and that's in all modes, including vehicular traffic.”

Mayor John Tory has been a vocal proponent of the ActiveTO program and has repeatedly said that he would like to see it made permanent.

The program also has its fair share of supporters on city council.

In a message posted to Twitter on Sunday morning, Coun. Joe Cressy said that the city should actually be expanding ActiveTO and not curtailing it.

“The pandemic has exposed the importance of accessible public space. Our task is not simply to beat this pandemic, it’s to build a new and better city afterwards,” he said.