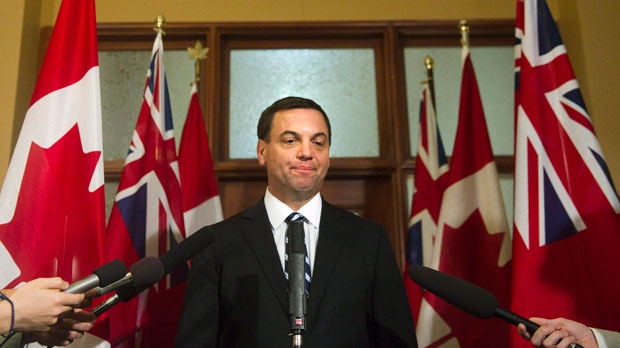 Ontario Conservative leader Tim Hudak speaks to the media at a press conference on Wednesday, June 20, 2012. (The Canadian Press/Nathan Denette)

TORONTO -- The Liberal government's claim of negotiating a two-year pay freeze with the Ontario English Catholic Teachers Association was challenged Wednesday by the Opposition, which predicted many teachers will still get raises.

The Catholic teachers' union was the first to agree to the wage freeze, and accepted three unpaid professional development days in the second year of their contract.

The Liberals say the deal amounts to a 1.5 per cent pay cut, and wants to strike similar agreements with the other teachers' unions.

However, the Progressive Conservatives said teachers will be allowed to advance on their salary grid, which means automatic raises for many of them every year.

"Under the grid, a teacher will move up in salary every year and over a two-year period, that's pretty well a $7,000 wage increase for 40 per cent of the teachers," said PC Leader Tim Hudak.

"That's not a wage freeze, and they failed to find savings elsewhere to balance that equation, so we're actually in this deal blowing a $300-million hole in the fiscal plan."

The government said the salary grid will be frozen for all teachers in the first six months of each year over the next two years.

The Liberals say they must negotiate pay freezes with more than one million public sector workers, including doctors, nurses and civil servants, to eliminate a $15-billion deficit.

Education Minister Laurel Broten said the English Catholic teachers agreed to a 1.5 per cent pay cut to allow younger teachers to move up the grid, which takes into account experience and qualifications.

"Only Tim Hudak would cry foul over an agreement that freezes salaries," Broten said in a statement.

"This agreement allows the government to meet its fiscal targets while protecting the best education system in the world."

The Education Ministry sent out a letter to school boards this week warning them not to deviate from the provincial framework in local bargaining with teachers, including a thinly veiled threat that the province would take over boards that don't comply.

"Concluding local bargaining outcomes outside the terms of the provincial funding framework would raise concerns about a board's ability to meet its financial obligations, at which point the minister could decide to exercise her powers as set out in the Education Act to put the board on a more sustainable footing," wrote Gabriel Sekaly, assistant deputy minister of education.

That letter shows the school boards are pushing back because they know this deal will cost them more money, said Hudak.

"Clearly if there were truly a wage freeze, the school boards and the trustees would be all for it," he said.

"I think this demonstrates, that's the proof right there, that this isn't a wage freeze."

Hudak and the Tories want to legislate a mandatory wage freeze for all public sector workers, which he says would save $2.5 billion, but the Liberals say the courts would overturn any such legislation.

"If tried here in Ontario, it would be overturned by the courts, and cost taxpayers billions of dollars."

Under the agreement, English Catholic teachers will no longer be allowed to bank sick days and their allotment of 20 sick days a year will be cut to 10. However, sick days already banked will be protected and can be cashed out at retirement.

There are 10 professional development days a year and teachers are obliged to show up for work, but the province agreed to let teachers take the three unpaid days off under the new deal.