Toronto’s Pearson International Airport says removing vaccine mandates for domestic and outbound travel is “a step in the right direction,” as travellers continue to face lengthy wait times and an increase in flight cancellations.

The federal government announced Tuesday that vaccine requirements for domestic travel on planes and trains as well as outgoing international travel will be suspended as of June 20.

Foreign nationals coming to Canada, however, will still be required to be vaccinated.

The government says the move is “based on science” but the travel industry hopes it will help relieve prolonged delays at airports across the country, which are primarily being blamed on staffing shortages and remaining COVID-19 health checks that are slowing the processing times at customs.

Federal Transport Minister Omar Alghabra says the government is working swiftly to address the delays, especially as unvaccinated Canadians will soon be able to fly.

"The data by the way proves it. The last couple of weeks we're seeing significant improvements in delay data, whether for outbound travel or inbound travel but I know we need to do more," he added.

As of last Saturday, random COVID testing at airports for vaccinated travellers returning to Canada was suspended until June 30. After July 1, all random testing will be done off-site.

GTAA Spokesperson Tori Gass says the removal of vaccine mandates for those workers will be helpful as terminated airport workers can be rehired during this busy travel season.

“While vaccination rates have been high throughout the Toronto Pearson worker community during the pandemic, there are hundreds of workers across the Pearson ecosystem who are sitting on the sidelines due to this policy, and in a situation where we could use every trained and able body to support our recovery, this represents a very positive development,” she wrote in a statement Tuesday before the government made its announcement.

“Of course, there is more that can and should be done to address the delays that airports are facing, including moving all health checks outside the airport,” she added. 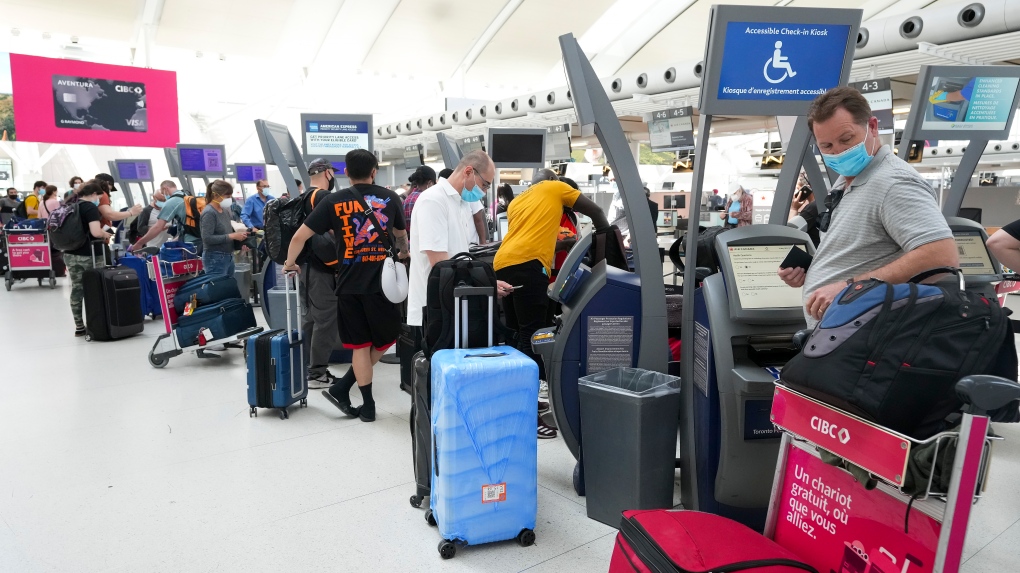 People wait in line to check in at Pearson International Airport in Toronto on Thursday, May 12, 2022. THE CANADIAN PRESS/Nathan Denette

The Tourism Industry Association of Ontario is also in favour of removing the vaccine mandates and says it will reduce barriers and red tape for travelling.

"This is something that we've been calling on the federal government to do, to remove those barriers to travel that make it so difficult for tourism markets to reach visitors. It's been two years of travel barriers and restrictions and so this is such an important step to normalizing travel again," Jessica Ng, director of policy and government relations, told CP24.

"We ultimately need to follow the lead of European counterparts and remove vaccine mandates for all travellers in all directions," she added.

The Canadian Federation of Independent Business (CFIB) says the move is welcome news for small businesses but more restrictons need to be eased, particularly for international travellers.

"Unvaccinated travellers still have to quarantine on their return to Canada. This is an additional burden on many businesses and their employees, such as truck drivers, that cross borders for work. The federal government has also not provided any clarity on when it will lift restrictions on international travellers who are not vaccinated," CFIB President Dan Kelly wrote in a statement Tuesday.

Ottawa issued vaccine mandates for travellers on October 30, 2021, requiring all passengers on planes or trains to be vaccinated with two doses of an approved COVID-19 vaccines in order to travel.

However, many health experts have argued that the mandates have been outdated for some time as two doses aren’t sufficient to suppress transmission of the Omicron variant of the virus.

“The goal of that program was really to prevent transmission of COVID or at least reduce the risk of transmission of COVID in those settings. In the Omicron-era it’s pretty clear that two doses of a vaccine, while still helpful in protecting against severe infection like hospitalization and death…, it does very little, if anything, in preventing onward transmission and infection,” Infectious diseases specialist Dr. Isaac Bogoch told CP24 Tuesday morning.

“There’s this convergence between science, epidemiology, policy, and sprinkle in a little politics I’m sure as well, and you could see why dropping this now is the right thing to do,” he added.