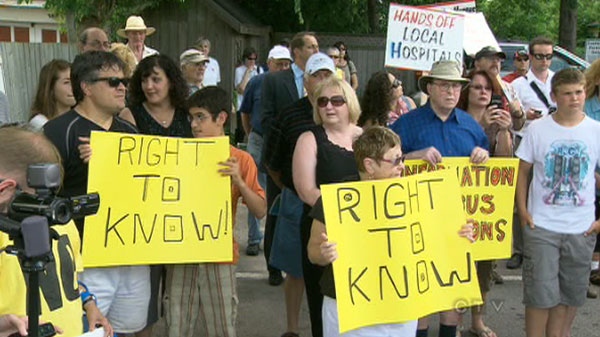 TORONTO - The newly appointed supervisor for the Niagara Health System says he wants to rebuild trust in a community that has been faced with a spate of hospital-related concerns.

Kevin Smith, who heads St. Joseph's Healthcare in Hamilton, was appointed to the post Wednesday by the province, following a C. difficile outbreak and other problems at Niagara-area hospitals.

Smith will immediately take over full power of the hospital board and corporation, the province said. He'll report directly to Health Minister Deb Matthews.

"I know that there have been some challenges around trust in the community," Smith told a news conference in Niagara Falls.

"Clearly our focus will be on rebuilding trust and examining clinical service delivery with the safest and most efficient environment possible."

Listening to feedback and concerns from the community, as well as health-care providers and officials in the system will be part of the job, he said. Being transparent and communicating with the public and media will also be high on his to-do list.

Noting his background as a health administrator, investigator and medical educator with experience in many different health settings and communities, Smith said he's ready to take on the pressing issues in the Niagara region.

It's not known how long Smith will be in the position, but he said such postings usually last about a year.

"If we can get it done much quicker than that, we'll be delighted," he said.

The government announced earlier this month that it would appoint a supervisor after more than 30 C. difficile-related deaths were reported at Niagara institutions since the end of May. The number of deaths related to the outbreak stood at 33 as of Wednesday.

The province said the outbreak and other problems had undermined public confidence in Niagara-area hospitals.

She said Smith's knowledge and experience will allow him "to continue to improve patient care and help the NHS regain its stature in the community."

"I want to keep working with the people of the Niagara region to strengthen the NHS and make sure it remains an anchor in the community for years to come," Matthews added.

The Progressive Conservatives said they were happy to see Smith in the job, but called the appointment "long overdue."

"It comes too late for Niagara families who've been impacted by the tragic failures of the Niagara Health System," said Lisa MacLeod, the party's government accountability critic.

MacLeod pointed out that PC Leader Tim Hudak has been calling for a review of the Niagara system since 2007.

Marin's office said Wednesday that Ontario is the only province whose ombudsman does not have a mandate to oversee hospitals or long-term care homes.

Despite this, the office reported receiving "many serious complaints about these facilities every year that cannot be investigated."

A total of 291 complaints about hospitals were received in fiscal 2010-2011, Marin's office said in a release.