TORONTO -- Subway service has resumed on Line 1 after a work car derailment at St. George Station caused a six-hour delay on Thursday morning.

The incident prompted the transit agency to suspend train service between St. Clair West and Union stations beginning at 6 a.m.

TTC spokesperson Kadeem Griffiths told CP24 at around 7 a.m. that about 40 shuttle buses had been ordered and approximately 20 of them were currently in operation.

“It is quite a big patch of the subway there that is out of service right now but we have quite a few options available for customers this morning,” he said. 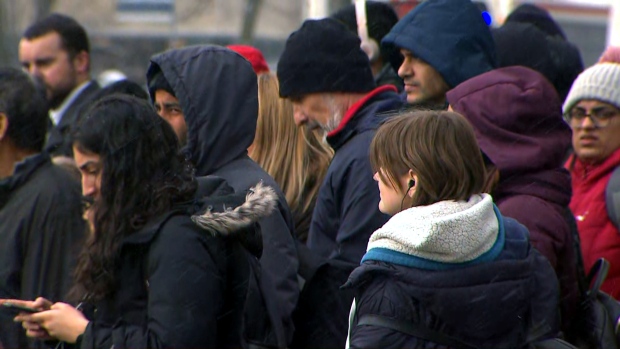 To accomodate the morning rush, at around 8:30 a.m., the TTC said 100 shuttle buses were operating in the area.

Griffiths said the TTC was boosting service on east-west routes, including putting additional streetcars and buses on the roads and adding more cars on Line 1 on the Yonge side.

UPDATE: Customers may use GO Transit at Danforth, Kennedy, Kipling, Dundas West, Downsview Park, and Union Stations (including the UP Express) for the cost of a TTC fare. TTC PRESTO customers are not required to tap prior to boarding. https://t.co/dM3TBz6BXW

The TTC also warned commuters during the delay that they may experience "longer than normal wait times" between Union and Finch stations on Line 1 due to the ongoing problem at St. George Station.

As well, the Toronto Police Service was advising drivers to be patient in the affected areas.

CROWDS:
- due to subway being suspended, crowds are gathering at several locations on the subway lines
- please be patient, TTC has dispatched buses to assist
- expect delays
GO#303358
^ep2

Griffiths noted that this derailment likely would not be as disruptive as the partial derailment of a train on Line 2 last month. 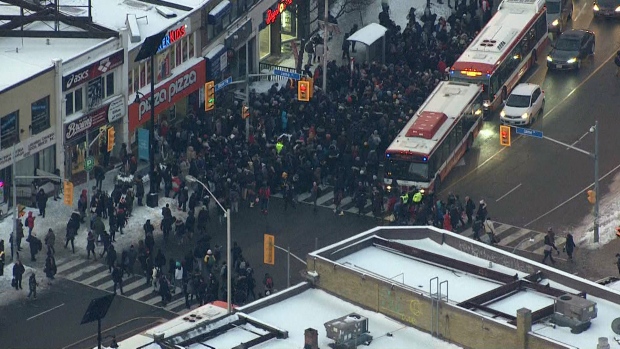 “This is quite a different situation,” Griffiths said, adding that work cars are much smaller than regular subway trains.

Commuters expressed frustration Thursday at the repeated issues on the subway system.

“It seems like shuttle services are the new thing and taking the actual train isn’t,” one commuter said outside St. George Station on Thursday morning. “The services are just not reliable.”

Dear Mayor @JohnTory What is happening??? Please take action! It was never ever THIS BAD . There is an issue EVERYDAY!!!

It's taken my daughter 2 hours to get from St. Clair West to St. George and she's still not at her final destination! Beyond frustrating!

Mayor John Tory apologized to commuters for the inconvenience this morning.

"It was the worst possible time for that to happen," he said at city hall on Thursday morning. "There will be of course a complete investigation into why it happened."

TTC CEO Rick Leary said the transit agency has not yet determined what caused the derailment but confirmed that officials will investigate.

He said the derailment was “complex,” which is why it took so long to restore service.

“Every incident like this we do an investigation… We don’t want this to happen again and that’s why we took our time this morning. When you are doing this, you want to do it right,” Leary said.

“You hope you get lessons learned, no doubt, because you want to prevent it from happening again. But for the customers there today, it is very bothersome to them and we recognize that.”