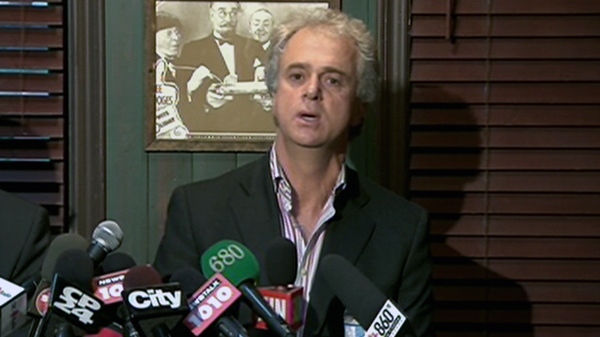 George Foulidis, owner of the company that operates the Boardwalk Pub, addresses a news conference on Thursday, Sept. 15, 2010.

Rob Ford is being sued by a Beaches pub owner after the Toronto mayoral candidate suggested the businessman bribed city officials to secure a lucrative contract extension.

George Foulidis of Tuggs Inc., the owner of the Boardwalk Pub, is suing Ford for $6 million, claiming Ford's unfounded accusation has damaged his reputation as a businessman.

The Globe and Mail reported that Foulidis served Ford on Tuesday.

"As a direct result of the false and defamatory statements of Mr. Ford ... Mr. Foulidis has been cast as a criminal and has suffered embarrassment and humiliation," reads an 11-page statement of claim, according to the Globe.

A spokeswoman for Ford's mayoral campaign confirmed the suit on Wednesday.

"It is now in the hands of Rob's attorney," Adrienne Batra told ctvtoronto.ca.

The Boardwalk Pub is located just off of Woodbine Beach, a high-traffic location especially during the summer.

Back in mid-August Ford (Ward 2, Etobicoke North) told the Toronto Sun's editorial board the Tuggs deal was rotten.

The statement of claim references similar comments made during an interview on radio station Newstalk 1010.

Foulidis has demanded Ford apologize for the remark. Last month he threatened to proceed with legal action. There is no corruption and Ford has not provided evidence to support his accusation, Foulidis has said.

In the past, Ford has refused to apologize, while Mayor David Miller and Ford's campaign rivals have blasted him for the comments.

Last spring, an untendered 20-year contract arrived between the city and Tuggs.

Tuggs agreed to spend $2 million on capital improvements and to pay the city an additional $2 million in rent than under its previous agreement, Foulidis said.

Foulidis said that Ford has alleged that his business, by making contributions to the campaigns of politicians, has done something corrupt.

Foulidis has made political contributions to the campaigns of municipal politicians, including Coun. Sandra Bussin (Ward 32, Beaches-East York). She had supported the sole-sourced contract in 2006, but recused herself from the final vote.

The agreement was reached with city council during an in-camera meeting, a private process Ford has demanded should be made public.

The city has changed its policies so that future deals such as the Tuggs contract are open to public tender.