For the average golfer, a hole-in-one is the kind of accomplishment you talk about for years. But for two golfers to do it with back-to-back shots is the stuff of legend, and on Saturday afternoon in Milton, Ont., two men firmly entered legendary territory.

When Jack Williams, 18, scored an ace on the fourth hole of two man match play, it was cause for celebration at Wyldewood Golf and Country Club. What happened next caused an uproar so loud, many in attendance assumed there must be a medical emergency.

“I had just hit a nice, perfect shot. It bounced twice and disappeared,” Williams told CTV News Toronto. “We all lost it because we knew it went in. Everyone was going crazy and then Nick stepped up.”

Not one to be outdone, 72-year-old Nick Corriero, replicated the hole-in-one on the very next shot.

“I thought ‘this is going right at it’ but I didn’t see it hit,” explained Corriero of his follow-up feat. I heard Nick say ‘it’s in the hole’ and I’m stunned. It’s crazy.”

Statistics back him up. According to the PGA less than two per cent of golfers score a hole-in-one in any given year. The odds of two players from the same foursome acing the same hole is 17 million to one. 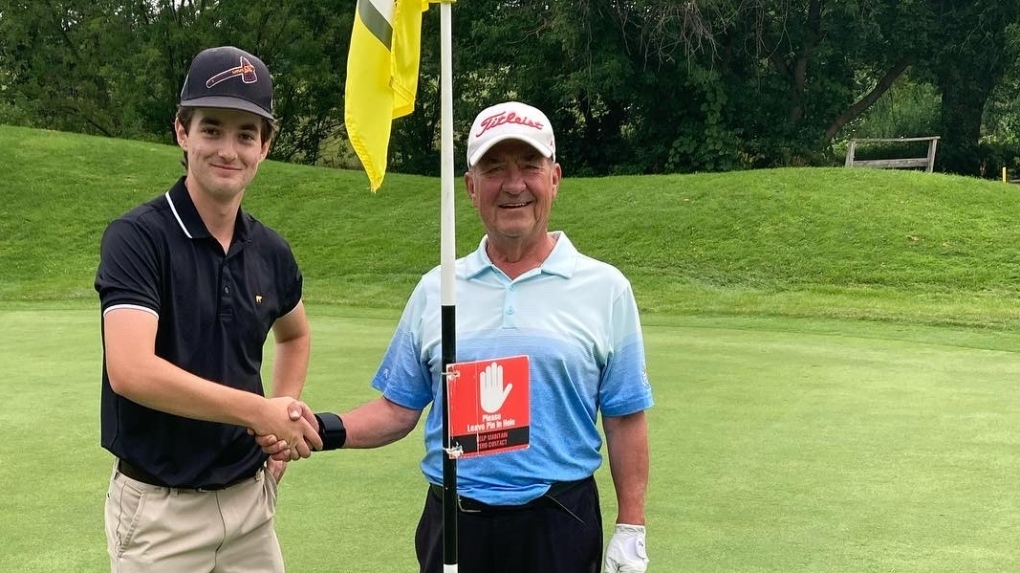 “I’ve tried to find odds on back-to-back shots going in and it’s 64 million to one,” said Chris Falbo, of Wyldewood Golf and Country Club, where the wild feat occurred. “We’ve only had one hole-in-one all season, and it’s already late July. This is truly remarkable.”

“It was a moment where we all just stopped and asked ‘did that just happen?’ I was getting a little misty,” said Craig Williams, Jack’s father and teammate for the day. “We aren’t a hugging family but he unabashedly ran over and embraced me. I couldn’t have been prouder.”

It was an emotional day for Corriero as well. His hole-in-one was a precursor to an evening with his wife of 45 years, Rita.

“It was a good day,” said Corriero. “We went out for a nice dinner and it was all about her.”

The good cheer was contagious. Golf etiquette dictates anyone who scores a hole-in-one buys a round of drinks for the clubhouse.

Wyldewood asks its members to pay an annual ten dollar premium, saving Corriero and Williams from a bittersweet day, one that saw the course packed following controversial closures earlier this year, part of the provincial government’s attempts to curb COVID-19 case counts.

Wyldewood toasted its members once on Saturday, a follow-up round of complimentary drinks will occur later in the week.

While those drinks didn’t go on the teen’s tab, he, along with 35 other club members did spend a few dollars in an effort to spread the wealth of good luck.

“When we finished my dad and I drove over to the gas station. He said we had to buy a lotto ticket. So we bought one and then Chris (Falbo) started a Lotto Max pool going. We got a bunch of members to go around to collect money and we’ll see what we can make out of this thing.,” he said.

The Canadian Border Services Agency is temporarily allowing fully vaccinated travellers a one-time exemption to not be penalized if they were unaware of the health documents required through ArriveCan.

The man accused in the stabbing attack on Salman Rushdie pleaded not guilty Saturday to attempted murder and assault charges in what a prosecutor called a 'preplanned' crime, as the renowned author of 'The Satanic Verses' remained hospitalized with serious injuries.

Canadian Blood Services says it is in talks with companies that pay donors for plasma as it faces a decrease in collections.

Who is novelist Salman Rushdie and why has he faced death threats?

After facing years of controversy over his book, famed novelist Salman Rushie remains hospitalized after a stabbing attack left him with serious injuries. CTVNews.ca has a look at his life and why his work has prompted years of death threats.

About 14 per cent of Ontario hospitals reporting less than a week supply of epidural catheters: Ontario Health

Approximately 14 per cent of hospitals in Ontario are reporting they have less than a week’s worth of epidural catheters in stock, according to an Ontario Health memo sent to hospital chief executive officers on Friday.