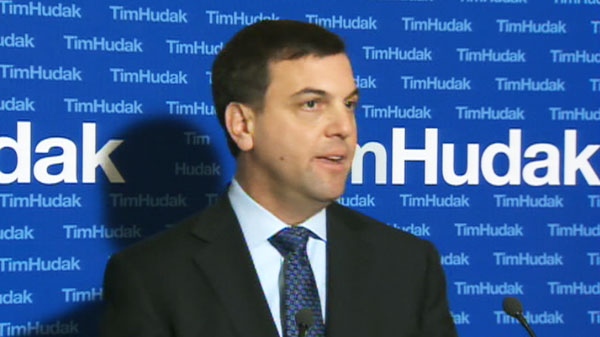 TORONTO - Progressive Conservative Leader Tim Hudak is playing down suggestions that his party is facing an internal rift that could hurt its chances of forming the next government.

The Ontario Landowners Association has sent a letter to Hudak asking him to urge his caucus and staff to respect the conservative property rights group.

OLA president Deborah Madill says she wrote to Hudak after "negative" comments about the organization appeared in the press about a turf war in eastern Ontario.

She says she wanted to remind Hudak that the OLA is not a political party and is dedicated to defend landowners' rights in the province.

The clash went public last month when Tory MPP Norm Sterling complained that Jack MacLaren, a former Landowner president, was trying to oust him from his Ottawa-area seat.

Sterling also accused his caucus colleague Randy Hillier -- who founded the OLA -- of helping his friend MacLaren in a failed bid to take over the riding association.

Hillier is a former president of the Lanark Landowners Association, which once sent a picture of a dead deer to Liberal cabinet minister Leona Dombrowsky with her name written on the photo.

In the lead-up to the 2007 provincial election, Hillier threatened to run his own slate of Independent candidates in some rural ridings if former leader John Tory blocked his nomination as a Conservative.

Hillier has denied that he was working behind the scenes to oust Sterling, but the accusations have created a big headache as the party heads into the Oct. 6 election.

"I just wanted to remind Mr. Hudak that the OLA is not a political party, that we're non-partisan, and we're dedicated in our mandate to fight and defend landowners' rights in Ontario," Madill said.

"That's basically what the letter was geared towards."

Hudak said he hasn't seen Madill's letter, but isn't worried that OLA members may run against Tories in other ridings that would split the conservative vote.

"I'm seeing more and more people who want to get involved with our party and bring needed change to this province," he said Wednesday.

Hudak said five or six people have already expressed interest in running as the Conservative candidate in the riding of Elgin-Middlesex-London, now that longtime Liberal and Speaker Steve Peters has announced he won't run for re-election.

Madill said the OLA doesn't run its own candidates, but if a member of the organization wishes to run for election, they're free to do so.