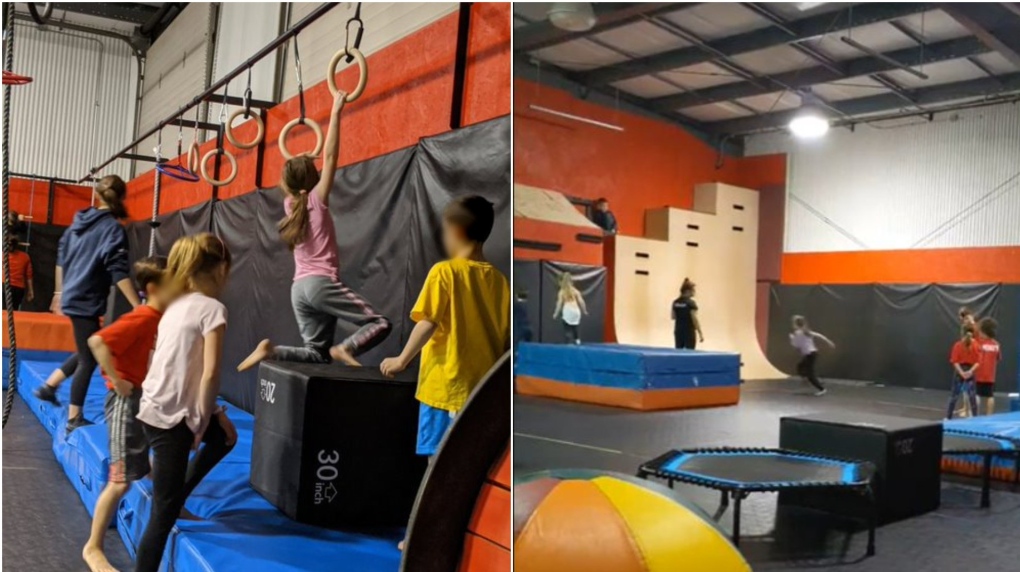 Jane Bedford said she signed her 11-year-old daughter up for a series of classes called “Ninja Warrior Parkour” at Discipline Wrestling in Ancaster, just west of Hamilton.

Bedford told CTV News Toronto she paid $260 for a pack of eight sessions at the gym, which features monkey bars, swinging ropes, and trampolines for the students to navigate through.

She said her daughter attended and enjoyed the first session masked in the indoor facility without issue, noting that the owner of the gym was not present at the time.

Two weeks later, the mother and daughter went for session number two with their masks on and said they were greeted by the owner.

“'Oh, you don’t have to wear a mask here,’” Bedford recalled the owner saying to her.

Bedford said the owner suggested that, due to the physicality of the class, her child should be unmasked during the session. Bedford said she explained to the owner that her daughter had already participated in a class with a mask on, and that it was her preference to wear the face covering in the indoor space.

She said she was left “aghast” and that her daughter, who was present during the interaction, was scared by being spoken to in such a stern manner by a stranger.

Bedford and her daughter are Indigenous, and she said discrimination hits close to home.

“We talked about ... her ancestors and how discrimination happens. And it just got her madder and madder,” she said.

Now, Bedford is trying to get her money back for the outstanding classes she purchased but alleges the company is ignoring her. Moreover, she wants an apology.

"I really just want them to apologize to my daughter. I want her to realize that there are repercussions for discrimination."

Discipline Wrestling did not respond to CTV News Toronto's request for comment.

CAN A BUSINESS BAN MASKS?

Richard Powers is a University of Toronto associate professor with expertise in business and corporate law and called the situation "ridiculous."

"We've seen a lot of unreasonable activity during this whole pandemic. But in a situation like this, where the child wants to wear a mask, the business is required to make reasonable accommodations," Powers told CTV News Toronto over the phone.

“And a reasonable accommodation, for this, would be to let her wear the mask. There’s no risk to anyone. In fact, it’s safer.”

Mask mandates in most public settings were lifted in Ontario on March 21.

Ever since then, wearing a mask in places such as gyms, restaurants, movie theatres, and sports venues has become a personal choice. Even as premier, Doug Ford has told Ontarians that “if you want to keep the mask on, keep it on,” after the mandate was lifted.

Ontario’s Ministry of Health echoed that advice in an email to CTV News Toronto.

“Businesses and organizations may choose to implement their own rules related to masking. However, they must follow any applicable laws (e.g., Human Rights Code, Occupational Health and Safety Act) and should obtain independent legal advice should they consider doing so.”

While it’s unclear if the decision by Discipline Wrestling is in contravention of the Ontario Human Rights Code, Powers suggests it could be.

"Anything that would deviate from a reasonable accommodation could be, I would say, a human rights violation," he said.

"But again, you have to think that cooler heads are going to prevail…At least from what we’ve heard, there’s no reasonable explanation as to why they would refuse to allow the child to wear a mask," Powers said.