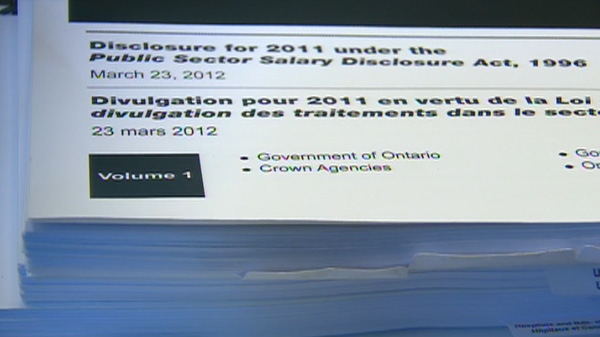 The Ontario government will move to close a loophole in the sunshine list of public sector workers earning over $100,000 a year, The Canadian Press has learned.

The Liberals will "tighten up the definitions to capture per diem income reported on T4-As," said a government source who requested anonymity.

The government is still trying to determine how many workers in the broader public sector -- about 1.3 million people are paid by Ontario taxpayers -- have not been disclosing their per diem incomes.

"It's not expected to be a significant number," said the source, "and we're committed to correcting this oversight and will have numbers soon."

Questions were raised after the Liberals recently appointed veteran Progressive Conservative Elizabeth Witmer as chair of the Workplace Safety and Insurance Board at a salary of $188,000.

It turns out the outgoing chair, Steve Mahoney, made $129,000 last year, but he wasn't on the sunshine list.

The WSIB said his income wasn't on the list because Mahoney, who was paid $550 a day, was a part-time chairman, while the position has been bumped up to full-time for Witmer.

The salary caps for public appointments made by Cabinet are public information -- Mahoney's was $135,000 a year -- but the actual pay is not reported on the annual sunshine list.

Incomes from per diems were not included in the original 1996 Public Sector Salary Disclosure Act, a fact that has gone unnoticed until now. Only income from T4 slips is covered by the legislation.

The government came under attack when the 2011 list was released in March and it did not include the sky-high salaries of some of the former top executives at the troubled Ornge air ambulance service, despite promises of more transparency.

The salary of Ornge's ousted chief executive Chris Mazza -- $1.4 million -- was nowhere to be found.

Premier Dalton McGuinty has consistently rejected suggestions the $100,000 level for public salary disclosure set in 1996 should be raised.