TORONTO -- A grinning Doug Ford declared a new era officially underway in Ontario on Friday as he assumed the reins of the province and unveiled the leaner cabinet tasked with executing his widely touted agenda of fiscal responsibility.

Ford, who cruised to victory earlier this month in an election that reduced the governing Liberals to a party without official status, made good on a promise to trim the size of the provincial cabinet.

Ford has named 20 ministers to cabinet posts, reserving some plum positions for the two women who challenged him for leadership of the party earlier this year. Under former premier Kathleen Wynne, cabinet had as many as 30 members.

At an outdoor ceremony before cheering supporters, Ford outlined a litany of global challenges and perceived past political wrongs before promising change had arrived.

Ford, long criticized for divisive partisan rhetoric, pledged to govern for all Ontario residents and to work with members of the other three parties in the legislature.

The crowd, gathered in scorching conditions to witness Ford's speech, greeted him enthusiastically as he proclaimed himself a premier for the people.

"I support him because I feel in my heart he's sincere," she said. "All the promises or goals he had set for Ontario. He is for the people."

Others said they came to show that not everyone supports Ford despite his decisive victory. Taryn Eadie, 26, held up a bright pink sign that read "Not my premier" as she stood at the front of the crowd.

"A lot of people obviously disagree with my sign but then there are a lot of people who are here and appreciative that I did come," she said. "So I think not everyone is here supporting Doug Ford."

Ford's majority win closed the door on 15 years of Liberal governance, the manifestation of a public desire for change that the polls had long predicted.

Liberal fatigue combined with Wynne's plunging popularity contributed to the party's dramatic fall from a majority to a handful of seats and helped propel the New Democrats, with whom they shared some policy priorities, to the role of official Opposition.

Both the Liberals and the NDP congratulated Ford and his cabinet on the transition to power, but raised concerns about changes to government ministries.

Ford's cabinet selections, revealed during Friday's ceremony, suggest the new premier is trying to differentiate himself from the previous regime by bringing in fresh faces, including several from the private sector, and highlighting particular portfolios that are central to his agenda, said Andrea Lawlor, a political science professor at Western University's King's University College.

At the same time, she said, the new premier is rewarding key members of the old guard to show stability and unity within Tory ranks and offset his own lack of legislative experience.

"I think the makeup of the cabinet that we see is one that is very much meant to bring a little bit of continuity between previous PCs and contemporary PCs but also one that reflects individuals who are on board with the Ford agenda and willing to carry out his vision for the province of Ontario," she said.

His chosen team of seven women and 14 men -- one of them a member of a visible minority -- includes several who came from the private sector, which Lawlor said suggests Ford is looking for "people who come from the business world, people who perhaps understand the bottom line."

In naming Christine Elliott, a veteran provincial legislator who returned to politics this year to contend for the party leadership, as deputy premier and minister of health and long-term care, Ford aimed to appeal to those with a more centrist approach, she said.

"(Elliott) is measured, she is professional, she has a wealth of experience, an abundance of competence in the area of governance in general. And not only does she speak, I think, a little bit more to some of the elements of the PC party that were a little bit cautious around Ford...she provides this nice counterpoint to Ford's style."

Elliott, the province's former patient ombudsman, said her focus would be to deliver on the party's commitments to create long-term care and home care spaces, to create a comprehensive mental health system and work with physicians. She also repeated Ford's call for collaboration, saying legislators "need to work across party lines."

Toronto lawyer Caroline Mulroney, who came third in the leadership contest triggered by the abrupt resignation of Patrick Brown, has been tapped as Ontario's new attorney general and minister responsible for Francophone affairs.

Another prominent post went to Vic Fedeli, who stepped in as interim leader after Brown resigned and pledged to root out the rot from the party ranks. The longtime finance critic will now lead the charge on the file by becoming finance minister.

Fedeli said the government audit Ford promised during the campaign would start "immediately" but declined to give more details on the province's fiscal future.

Former Postmedia executive Rod Phillips, hailed as a star candidate throughout the election campaign, was named environment minister, a file that has received renewed attention in light of Ford's commitment to scrap the province's cap-and-trade system.

The ministry itself also saw climate change dropped from its name -- a move Lawlor, the political science professor, said "signals an agenda shift."

Phillips, who will be leading the effort to dismantle cap and trade, said there was no message behind the change and maintained the issue would stay at the forefront.

"Climate change is everybody's issue, it's not an issue just for the minister of the environment but obviously that's going to be a key focus for me," he said.

Former federal cabinet minister Greg Rickford now takes charge of Ontario's energy portfolio, a lightning-rod topic in the province due to years of rising hydro rates. The file is being combined with northern development and mines. Rickford will also oversee Indigenous affairs, though that remains a standalone ministry.

Raymond Cho, who once sat with Ford on Toronto City Council, assumes responsibility for seniors and accessibility.

Ford, who will also handle inter-governmental affairs as well as his duties as premier, campaigned this spring largely on a promise of fiscal responsibility, though he did not present a fully costed platform.

He said Friday he will recall the legislature the week of July 9. A spokesman for the PC Party said MPPs will return to work on July 11, with a throne speech set for July 12. 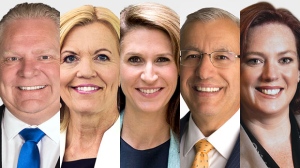