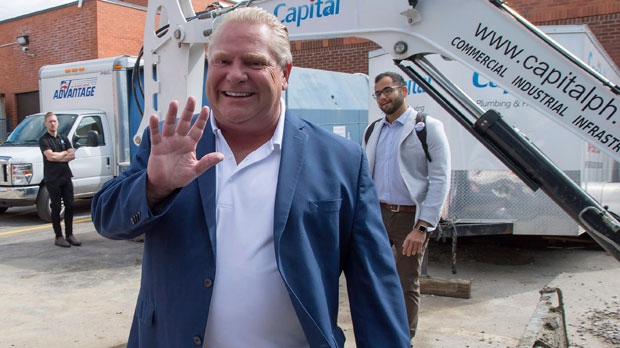 Ontario PC leader Doug Ford waves as he leaves from the back door of a campaign announcement in Toronto on Monday, June 4, 2018. THE CANADIAN PRESS/Frank Gunn

TORONTO -- Doug Ford is set to officially become Ontario's premier on Friday and he's inviting the public to come watch.

A ceremony is scheduled to take place on the steps of the legislature after the Progressive Conservative leader and his cabinet are sworn in inside Queen's Park.

While the indoor portion is closed to the public, the ceremony outside -- which will see Ford reaffirm his oath of office and give a speech -- is open to everyone.

Ford, who was elected to a majority earlier this month, has yet to say what size his cabinet will be or who will be appointed to each portfolio.

But he has made several other major announcements, including a pledge to scrap the province's cap-and-trade system immediately once the legislature resumes.

He has also placed the public service under a hiring freeze and ordered that all discretionary spending be put on hold.