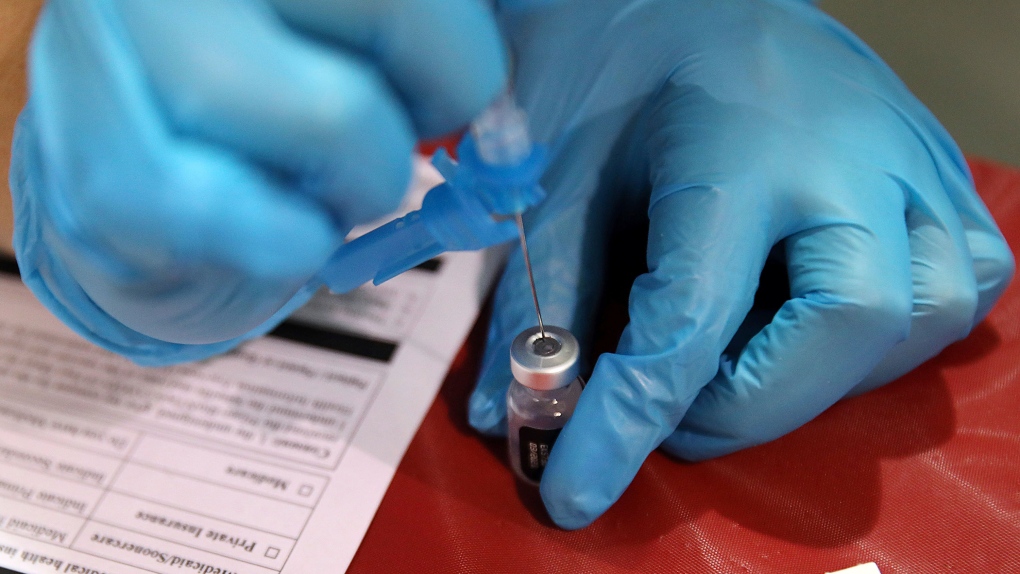 A Pfizer-BioNTech COVID-19 vaccine is prepared prior to being administered on Tuesday, Dec. 15, 2020. (Mike Simons/Tulsa World via AP)

TORONTO -- The Ontario government says some of its hospitals will be able to administer more than a 1,000 COVID-19 vaccines per day once the immunization campaign takes full flight.

Ret. Gen. Rick Hillier, who leads the province’s vaccine distribution task force, made the comments at a news conference on Tuesday, saying that the province expects to have 1.2 million people vaccinated in the first quarter of 2021.

“The prioritization is those in most vulnerable circumstances and our health care workers. If we total up everybody in those two categories, we have more people, about 1.4 million,” Hillier told reporters.

“Definitely, we'll have that we'll have more demand and we will have supply of the vaccine … So much depends on the supply and we remain committed that we will be able to vaccinate as fast as or faster than the vaccines supply arrives to us.”

The province began administering the vaccine to a small group of long-term care workers on Monday, one day ahead of schedule. The government got 6,000 initial doses of the Pfizer vaccine, which it sent to hospitals in Ottawa and Toronto.

As of noon on Tuesday, Ontario Premier Doug Ford told reporters that 142 health-care workers received the vaccine so far.

“We're going to carry on doing this. And until we defeat this terrible, terrible virus that we've been all living with,” Ford said.

“But the good news is there's light at the end of the tunnel. There's hope for everyone out there now and our challenge is to get more vaccines, which they're coming.”

Hillier said the government expects to receive 90,000 doses of the Pfizer vaccine from the federal government by December, which officials will send to hospital sites in regions with high infection rates.

The retired general said on Tuesday that the vaccine would be sent to 17 more sites in the “coming weeks.

The vaccine is expected to be more broadly available to the general public in April, the government has said previously, and will take six to nine months to inoculate the entire province of 14.57 million people.