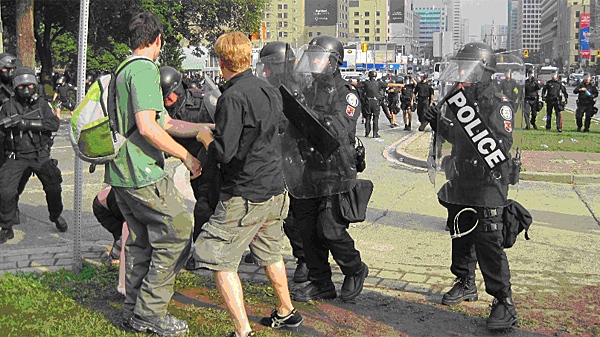 SIU investigators released this photo. They would like to speak with the individual in the green shirt (left) who likely witnessed the takedown of Dorian Barton on Saturday, June 26, 2010.

New photos have prompted the province's Special Investigations Unit to re-open the case of a G20 Summit bystander who was allegedly the victim of police brutality.

The SIU announced in November there wasn’t enough evidence to lay charges against any officers in the cases of Barton and five other people.

"Mr. Barton could not identify the officers involved in his arrest or fully explain how the injury occurred, nor was the remainder of the evidence capable of resolving these questions," Ian Scott, the SIU's director, said at the time.

The arm's-length agency reviews cases where people have been seriously injured or killed as a result of an interaction with police.

Earlier this week, more photos of Barton's arrest at Queen's Park surfaced in the media.

"On Jan. 12, the SIU received a number of photographs depicting officers in interaction with Mr. Barton during the demonstrations," the SIU said Friday in a news release.

"As result of this materially new information, Director Scott has reopened the investigation."

The SIU has also asked for one individual captured in a photo to step forward. He is dressed in a green shirt and wearing a backpack.

Barton is suing the Toronto Police Services Board and seven unidentified officers for $250,000.

None of his allegations against police have been proven in a court of law.

Barton faced charges of obstructing a police officer and unlawful demonstration. But those charges were withdrawn during an Aug. 23, 2010 court appearance.

The summit took place in Toronto on June 26 and 27 at the Metro Toronto Detention Centre in the downtown core. A small group of vandals broke out of a large, peaceful demonstration outside the summit's secure perimeter and proceeded to burn police cruisers and break windows.

As a result, police engaged in a widespread crackdown against all demonstrators. The Queen's Park grounds were to be the designated protest site.

One police officer has been charged with assault with a weapon in connection with G20 arrests. Const. Babak Andalib-Goortani is scheduled to appear in court on Jan. 24.