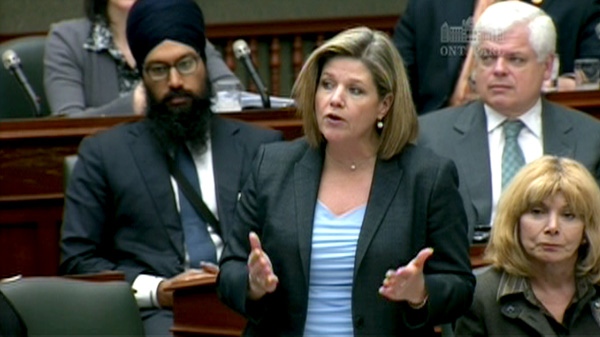 TORONTO -- The New Democrats made a move Thursday to temporarily ban bonuses for top executives and managers in the broader public sector.

The party introduced a private member's bill that, if passed, would eliminate performance pay and all forms of incentive pay for the next two years.

Horwath said her party drafted the legislation after The Canadian Press reported that nearly 98 per cent of eligible civil servants received performance pay last year when their wages were frozen, costing the province $35.6 million.

It's clear the system is not working, Horwath said.

"Rewarding managers with bonuses has simply become an under-the-radar way of bumping up their salaries, all at the taxpayers' expense," she said.

The ban on bonuses would only apply to new contracts, not existing ones, she said. It would apply to civil servants as well as managers in publicly funded boards, agencies and entities, including school boards, universities, colleges and hospitals.

She estimates the bill would affect about 90,000 managers and save about $200 million over two years.

The performance pay system may have been intended to attract and retain good managers, but that's not what it has become, Horwath said.

"If there is some way to implement a system that actually works, then we would be prepared to look at it," Horwath said.

"But at this point, that system does not work, it's not a performance-based system, it is simply a wage increase by a different name."

The bonuses are an embarrassment for the minority Liberals, who have been pushing for zero pay increases as they battle a $15-billion deficit.

They've clashed with both teachers and doctors in their battle to freeze pay, slashing fees doctors receive and introducing a controversial bill that would impose new contracts on teachers.

Duncan said he applauded Horwath's efforts, but dismissed the NDP bill as a poorly written document that would end up applying to only a handful of people.

He also suggested that the bill is intended to try to embarrass the government in the final week before two Sept. 6 byelections, which could give the Liberals a majority.

"The bill was obviously put together on the back of a napkin," Duncan said. "She's been accusing us of playing politics. This is very much designed for the byelections."

Duncan said a "comprehensive" approach is needed, and the government will be putting forward legislation and regulatory changes that would apply to all workers who collect performance pay.

But it won't happen before the byelections next week in Vaughan and Kitchener-Waterloo, he added.

"We can't rush something like that out quickly," he said. "I think they rushed it out because of the byelections."

Horwath denied she was playing politics, saying her party had urged the Liberals for some time to cap the salaries of chief executive officers in the public sector before they finally acquiesced.

The new bill is a natural extension of those demands, she said.

"We've been talking about how do we expand that idea of the CEO salaries, the cap on CEO salaries to a broader group of top managers," she said.

"Not specifically the bonus piece, but The Canadian Press story led us to a very obvious place to go."

The bonuses have also become a favourite topic for Progressive Conservative Leader Tim Hudak, who wants a legislated wage freeze for all public sector workers.

The Tories will support any bill that would cap compensation while the province is trying to dig itself out of its fiscal hole, he said.

"Here's the more important point though: why did Dalton McGuinty create that loophole?" he asked.

"Why did he in 2010, when he was supposed to get a wage freeze, create a loophole for bureaucrats to get merit increases?"

Private member's bills rarely become law, unless they're backed by the government.