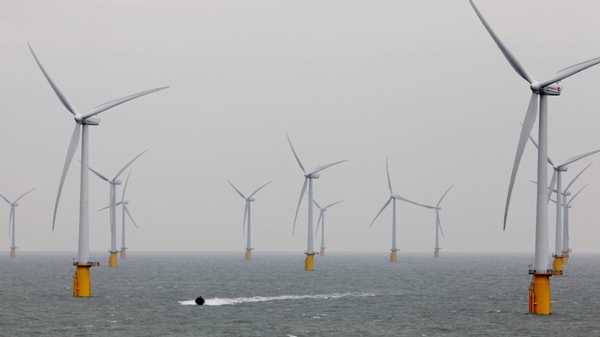 A small boat passes through the windmills of the Thanet Offshore Wind Farm off the coast of Ramsgate in Kent, England Thursday Sept. 23, 2010 as it is officially opened becoming the world's largest site of its type. (AP Photo/Gareth Fuller/PA )

TORONTO - Facing a court challenge, a growing backlash and an election, Ontario's Liberal government imposed a surprise moratorium Friday on all off-shore wind farms until there is more scientific research on their impact.

The government announced it would not go ahead with off-shore wind projects to generate electricity, saying there's too little evidence on how they may affect people's health.

"Fresh water wind turbines are something that's relatively new, and the Ministry of the Environment needs a level of comfort on the science before they can approve any further consideration of them," said Energy Minister Brad Duguid.

"On-shore, there's 30 or 40 years of peer-reviewed science ... there's no evidence of health impacts from on-shore wind, but off-shore wind is completely different."

Opponents of the giant wind turbines say that's just a smokescreen for a government that knows it's on shaky scientific ground.

"It's an admission that there's a lot of research that has to be done on off-shore," said Beth Harrington of Wind Concerns Ontario.

"It's all brand new in fresh water, but it's an indication too that there's a lot of work that needs to be done on-shore, where people are suffering."

The Liberals should also put a moratorium on new on-shore wind energy projects after receiving complaints of headaches, nausea and other symptoms people who live near them believe are caused by the giant turbines, said Harrington.

"The people of Ontario have been complaining for four years and the only thing the government has stopped so far is something that they haven't even started," she said.

"We want to be able to stop what they've already started."

The Progressive Conservatives said the Liberals were bent on pushing their Green Energy Act without considering the consequences and without listening to locally elected councils opposed to their plans.

"These guys failed to plan and moved for political reasons and are now backtracking on a Friday afternoon no less," said Opposition energy critic John Yakabuski.

"On large-scale wind projects, we want a moratorium until proper studies can be done, and they seem to be agreeing, kind of."

The New Democrats also questioned the government's motives for the sudden about-face on off-shore wind projects.

"It's a smoke screen, a scientific fig-leaf for them just sort of flailing around trying to figure out what to do next in a pre-election period."

Anti-wind power protesters have greeted Premier Dalton McGuinty in many communities across the province, but Duguid said the moratorium on off-shore projects was not politically motivated.

"The truth of the matter, there's been very little interest in our program on the off-shore wind side," he said.

Of the 1,500 green energy applications to the government's Feed in Tariff program, only five were for off-shore wind projects.

There was only one off-shore wind project, near Kingston, that had reached a contract with the Ontario Power Authority, but it had not received other necessary approvals.

Delaying the off-shore projects will not reduce Ontario's plan to generate 10,700 megawatts of power from renewable sources each year, about 90 per cent of it from wind power, said Duguid.

And an Environmental Review Tribunal has been holding hearings in Chatham and Toronto on a proposal by Suncor for a wind farm in Thamesville, which some residents fear will disrupt their sleep and cause other health problems. Those hearings are set to resume in Chatham on Feb. 15.