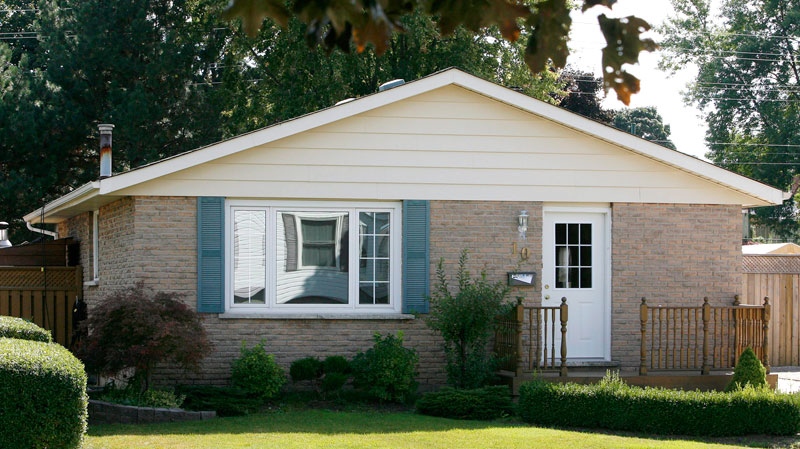 The house where OPP officer Laurie Hawkins, her husband Richard and their children Cassandra, 14, and Jordan, 12, died due to carbon monoxide is seen in Woodstock, Ont. on Thursday, Sept. 17, 2009. (Dave Chidley / THE CANADIAN PRESS)

TORONTO - Tragedies like the one that claimed the life of an Ontario Provincial Police officer and her family two years ago this week could be avoided if a bill to mandate the use of carbon monoxide detectors in all Ontario homes becomes law, Progressive Conservative Ernie Hardeman said Thursday.

Const. Laurie Hawkins, her husband Richard and their two children, Cassandra, 14, and Jordan, 12, all died when a clogged chimney vent caused carbon monoxide to seep back into their Woodstock, Ont., home.

Members of all three parties supported a private member's bill by Hardeman to require all residential dwellings be equipped with CO detectors on second reading Thursday, sending it to a legislative committee for further study.

"This would avoid more tragedies like the loss of the Hawkins family by ensuring all Ontario families are protected by a carbon monoxide detector," said Hardeman.

"I am asking the government to move forward with committee hearings this winter so we can make this law and save lives."

Hawkins's uncle, John Gignac, said the family's home did not have a carbon monoxide detector which could have alerted the family and saved their lives.

"I'm pleased that MPPs found it in their hearts to unanimously take this important step," said Gignac.

"Our family remains hopefully that committee hearings will proceed quickly for the benefit of all Ontarians."

Gignac, a retired firefighter, held a news conference Wednesday to urge legislators to pass Hardeman's bill, saying it's what his niece would have wanted.

"I can feel Laurie tapping me on the shoulder, encouraging me to go on," he said.

"Carbon monoxide is odourless, colourless and has no taste," he said.

"Having a CO detector in your home is the only way to know the poisonous gas is in your home before it makes you sick."

Private member's bills rarely become law in Ontario, but the Liberal government has signalled this one may get farther than Hardeman's previous attempt, which died on the order paper last spring.

Municipal Affairs Minister Rick Bartolucci said he was "a huge supporter" of CO detectors and has them on every floor in his home.

Carbon monoxide poisoning is blamed for the deaths of 414 Canadians, 87 in Ontario, between 2000 and 2007, said Hardeman.

The CO detectors sell for between $30 and $60 in Ontario stores.