Leafs go down to Bruins 6-2 in Boston 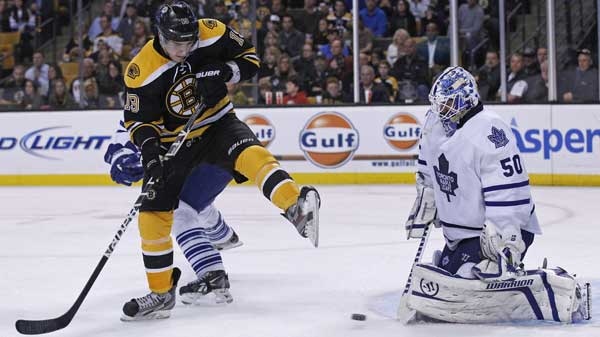 BOSTON - Zdeno Chara, Milan Lucic and Tyler Seguin had a goal and two assists each and the Boston Bruins handed the Toronto Maple Leafs their first regulation loss, 6-2 on Thursday night.

The Stanley Cup champions scored two power-play goals, matching their total in the first six games of the season, and won for the second time in five games. It was just the second time in 41 regular-season games that they scored twice with a man advantage.

David Steckel gave Toronto (4-1-1) the lead 7:29 into the game before the Bruins (3-4) scored three times in less than eight minutes to take a 3-1 lead after the first period. Nathan Horton and Chara scored on power plays and Chris Kelly connected with 2:11 left in the period. Lucic, Patrice Bergeron and Seguin scored in the third.

The Bruins, who had 11 goals in their first six games, rebounded from an undisciplined performance in a 4-1 loss to Carolina on Tuesday night. Rich Peverley's goal with 9:01 left had cut Carolina's lead to 2-1 before Boston lost its momentum by taking several ill-advised penalties.

Toronto played one night after a 4-3 shootout victory over the Winnipeg Jets in which Phil Kessel, a former Bruin, had a goal and two assists to increase his NHL-leading totals to seven goals and 12 points. He was scoreless Thursday.

Seguin was taken with the second pick of last year's draft obtained in the trade for Kessel.

Steckel started the scoring with his first goal of the season on a 30-foot shot from the slot that deflected off the left leg of goalie Tim Thomas as he lay on his back.

Barely three minutes later, at 10:32 of the first period, the Bruins tied it on Horton's second goal after backup goalie Jonas Gustavsson, playing for the first time this season, stopped Chara's 50-foot shot but left the rebound for Horton to put in the net on a power play.

Chara scored his first goal on another power play, at 16:05, on a pass from the blue-line from defenceman Andrew Ference, who tied his career high with three assists.

Less than two minutes later, at 17:49, Ference assisted on Kelly's second goal, starting the play with a pass to Lucic, who skated up the left side and across the goal line. He then passed it in front of the net where it bounced before Kelly lifted a backhander over Gustavsson.

Toronto had the best scoring chance of the second period when Grabovski, coming out of the penalty box, got the puck at the red line and broke in alone. But Thomas made the save at 8:43.

Notes: The Bruins were 2 for 24 on the power play before Thursday. ... C David Krejci returned after missing four games with what the Bruins called a core injury. ... Thomas broke a four-game losing streak against Toronto. ... Dion Phaneuf got his sixth assist for Toronto.