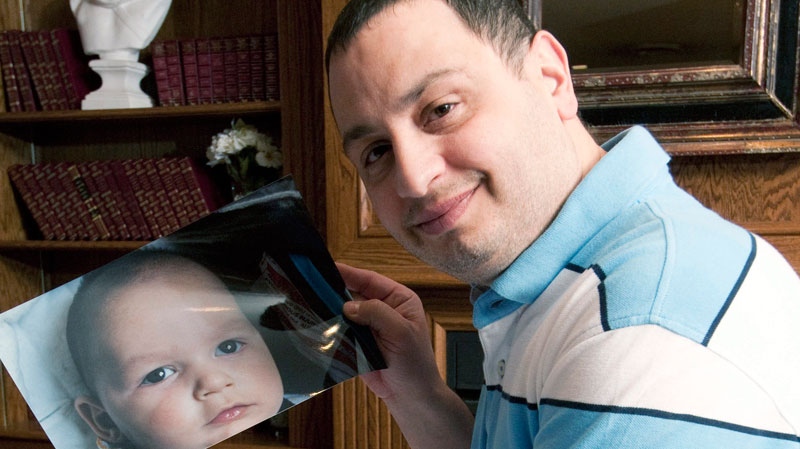 Moe Maraachli holds up a picture of his baby, Joseph, after speaking to members of the media gathered at the Lamplighter Inn in London, Ontario on Monday, Feb. 21, 2011. (Craig Glover / THE CANADIAN PRESS)

LONDON, Ont. - A southwestern Ontario couple fighting to bring their terminally ill baby home to die could have a resolution in their case as early as Monday.

Friends of the Maraachli family said Thursday their lawyer will meet Friday with representatives of the London, Ont., hospital where Joseph Maraachli is being kept on life support.

Joseph's father, Moe Maraachli, who has spoken about his 13-month-old son's plight, was advised not to appear at Thursday's news conference so as not to jeopardize the negotiations, said Schadenberg.

Earlier this week, London's Victoria Hospital had asked Ontario's Office of the Public Guardian and Trustee for consent to remove the breathing tube that is keeping Joseph alive.

The hospital made the move after the parents defied a court order to consent to the removal of the tube on Monday.

Schadenberg, the executive director of the Euthanasia Prevention Coalition, said the family had planned to announce they would appeal an Ontario Superior Court judge's ruling that they must give consent.

But the Victoria Hospital is reconsidering performing a tracheotomy that could allow Joseph to breathe long enough to go home and die in his parents' care, said Schadenberg.

Joseph was admitted to the hospital in October.

In November, London doctors said the baby should be removed from the ventilator because he's in a vegetative state and has no hope of recovery. He is fed through a breathing tube.

His parents fought the move, saying Joseph would suffer a painful choking death if the ventilator is removed.

They wanted the boy sent to the Children's Hospital of Michigan to get the tracheotomy but learned Wednesday the hospital would not accept a transfer.