TORONTO -- Standing inside his kitchen behind a Kitchen Aid mixer, holding a measuring cup halfway full of flour, Ontario’s Liberal Party leader did not offer up his own baked good recipe—rather he spent a little over a minute talking about the fact that “numbers really matter.”

“It’s not time for cheesecakes and wishful thinking,” Steven Del Duca said in a video sent out by his party on Saturday.

The video was created as a response to Ontario Premier Doug Ford releasing his “famous” cherry cheesecake recipe on Friday.

The recipe ended a week-long saga that started when Ford told reporters at a news conference that he makes “the best cherry cheesecake ever.”

“I do it from scratch. No recipe, I got it down pat,” he said on Monday. “You can tell I’ve eaten one too many cheesecakes. That’s my problem.” 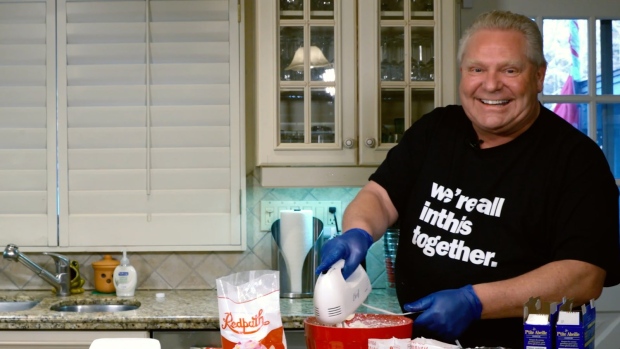 A trailer for the recipe was then released on Thursday night before the full video was published the next morning.

In a video of his own, Del Duca appears to be mocking the premier’s “Cooking with Doug” enterprise.

The Liberal leader is seen in the minute-long video surrounded by baking products like flour and baking powder, but he does not use any of them. Instead, he uses the time to criticize Ford’s leadership, especially when it comes to long-term care homes plagued with COVID-19 outbreaks.

“Here I am in my kitchen today. This is where me and my family spend an awful amount of time baking and cooking. And you know as well as I do, that when you are baking and cooking, it’s important to measure what matters, those numbers really matter,” he says

“Let’s consider those numbers in Ontario’s long-term care centres today. As we speak, over 1,300 women and men living in those long-term care facilities have passed away because of COVID-19.”

Del Duca goes on to say that personal support workers and nurses in long-term care homes have been waiting more than six weeks for personal protective equipment.