Horwath vows to cut greenhouse gas emissions in half by 2030 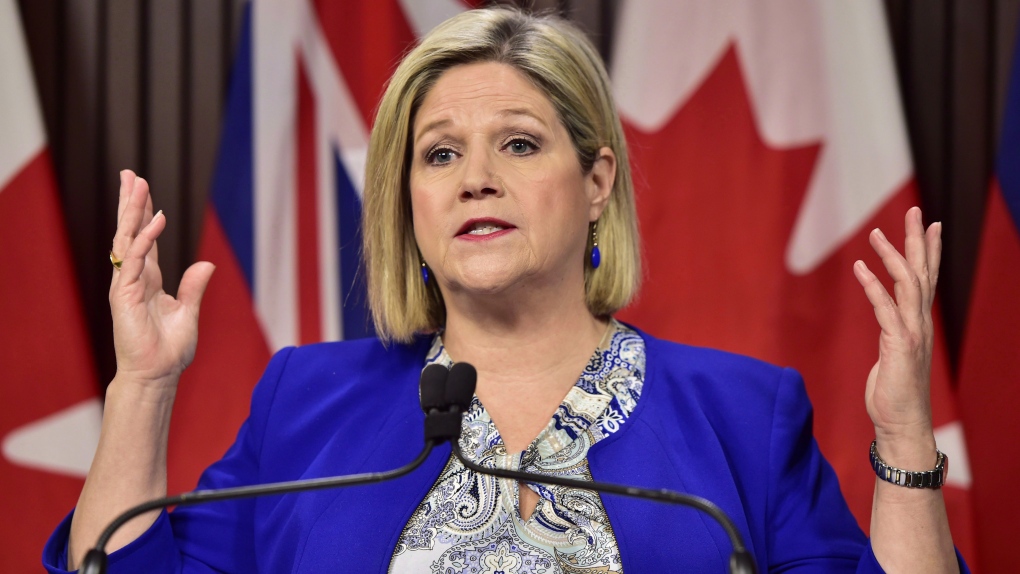 Ontario NDP Leader Andrea Horwath speaks during a press conference at Queen's Park in Toronto on Monday, Dec. 17, 2018. Ontario's New Democrats are gathering this weekend to discuss party priorities and hold a vote of confidence on their leader of ten years. THE CANADIAN PRESS/Frank Gunn

Barely a year after the historic 2018 provincial election — in which Ontario’s New Democratic Party was vaulted into the seats of the Official Opposition — leader Andrea Horwath is kicking off the unofficial campaign for 2022.

Horwath introduced a new policy plank called the Green New Democratic Deal, which puts the environment and greenhouse gas reductions at the centre of the party’s vision for the future.

The measure was introduced at the NDP’s semi-annual convention in Hamilton, where Horwath also faces a leadership review on her 10th anniversary as leader — a test she is expected to pass.

“We are going to make Ontario net-zero by 2050, starting with cutting greenhouse gas emissions in half by 2030,” Horwath told party members in a speech, suggesting the move would create more than a million jobs and billions of dollars in economic activity.

The party says while the province would rely on a carbon levy to force industries to reduce the carbon dioxide output, it would also focus on increasing access to public transportation, electric vehicle manufacturing and higher renewable energy generation.

An NDP policy document clarified, however, that a net-zero emissions target wouldn’t mean the closure of production facilities — such as a GHG-emitting steel factory — in Ontario.

Emissions would, instead, be offset through tree-planting programs to “remove carbon dioxide from Canada’s atmosphere.”

The policy document says the plan would need “large upfront investments” that would require a combination of “new revenue streams, fair carbon pricing, lending and borrowing.”

Horwath says taxpayer funded rebate programs would then help residents balance out the costs with energy retrofits to reduce expenses.

“We’re going to give homeowners rebates and interest free-loans, empowering them to move towards net-zero emission homes.”

The NDP plan comes at a time when polls show nearly half of Canadians are opposed to a carbon tax and carbon pricing could be a ballot box question during the upcoming federal election, according to a Forum Research survey released last week.

“The carbon tax looks like it’s mobilizing its opponents to vote in far greater numbers than its proponents,” says Lorne Bozinoff, President of Forum Research.

The system, implemented by the former Liberal government, allowed companies to purchase pollution credits from the province which could later be sold on a secondary market.

It also led to a 4.3 cent-a-litre increase in the price of gasoline and increased home heating costs as industries passed the costs onto consumers.

Horwath says, however, Ford is launching an “anti-environment crusade” in the face of rising floodwaters, wildfires and tornadoes.

“The climate crisis is not his priority,” Horwath told party members. “But it’s mine. It’s yours.”