Here's why Ontario's fall leaves are 'extra colourful' this year

Here's why Ontario's fall leaves are 'extra colourful' this year

If you think the fall colours have been particularly stunning across Ontario recently, you're not alone - experts say the foliage this season is more vibrant than in recent years thanks largely to specific weather patterns.

Sean Thomas, a professor of forest ecology at the University of Toronto, said the fall colours in Toronto this year have been remarkable, especially after duller colours seen last year.

“It has (been) probably the best in some years,” he said in an interview.

“Cold snaps in September and early October are kind of key to triggering that physiological process,” he said. “Last year was kind of remarkably dull. If you recall, we had a warm and somewhat dry fall.”

Many Ontarians who've been enjoying the stunning fall have taken to social media to post photos and videos of themselves among the orange, yellow and red leaves.

“Is it just me, or is this fall extra colorful this year?” wrote a person on Twitter while posting a photograph of foliage along the Don Valley River in Toronto.

Ben Rubin, an assistant professor of forest ecology at Western University, said the fall colours this season have been bright and beautiful in his home city of London, Ont., as well.

He said leaves change colours based on three factors - species, the length of a day, and the weather.

Since weather is the factor that varies from year to year in a similar provincewide pattern, a vibrant fall in one part of Ontario means similarly stunning colours can be expected in other parts too, he said.

Trees produce chlorophyll, which gives leaves their green colour, throughout the growing season but stop doing so as the weather gets colder and the daylight shortens. That's when two other chemicals - caratinoids and anothocyanin - which give leaves yellow and red colours, become more visible, he said.

The production of anthocyanin is linked to bright light and high sugar concentration in leaves.

“The amount (of anothocyanin) produced varies among tree species and depends on the weather,” he said. “In general, sunny days and cool but not freezing nights result in higher production and, therefore, brighter colours.”

Experts said the bright fall colours may last anywhere from a week to a few more weeks longer, but it largely depends on what weather Ontario gets. Winds and storms will likely mean a faster end to the colours, they said.

“If you want to see it, you should go soon,” Rubin said.

This report by The Canadian Press was first published Oct. 18, 2022. 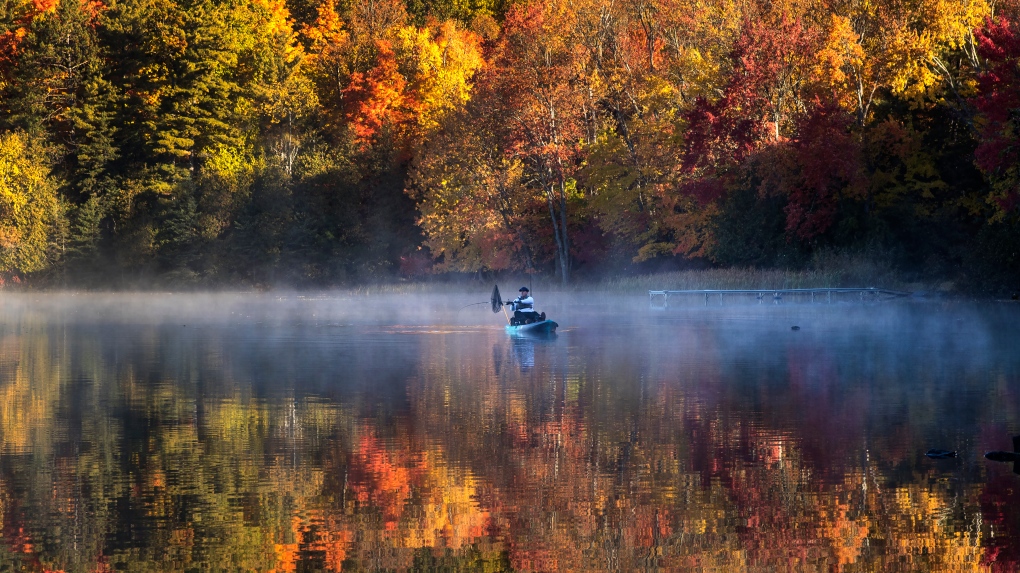 A fisherman in a kayak on Bass Lake is framed by fall colours in central Ontario, Monday, October 10, 2022. THE CANADIAN PRESS/Fred Thornhill