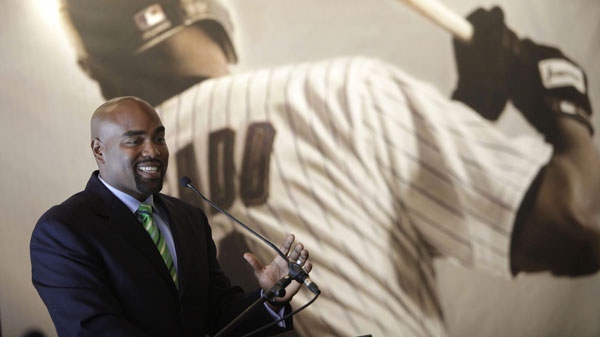 SAN JUAN, Puerto Rico - Carlos Delgado officially gave up Wednesday on coming back from a hip injury, announcing his retirement from baseball two years after he was sidelined.

The former Toronto Blue Jays and New York Mets first baseman announced his decision at a news conference in his native Puerto Rico.

"There comes a moment when you have to have the dignity and the sense to recognize that something is not functioning," the 38-year-old said. "You can't swim against the current."

The two-time all-star played 17 major league seasons, finishing with 473 home runs and a .280 batting average. He played for the Blue Jays from 1993-2004, went to the Florida Marlins for a season and finished out his career with the Mets from 2006-09.

Dressed in a navy blue suit and a bright green tie, Delgado remained jovial throughout a speech that drew tears from many in the audience, including former teammate Carlos Baerga.

The pain that usually struck every training session was too much to endure, Delgado said.

"And this coming from a man who had nine operations," he said. "It is a sad moment as a human being and athlete that some of your abilities aren't what they once were."

Delgado stopped playing in the majors in May 2009 and had two hip surgeries in nine months. He signed a minor-league deal with the Boston Red Sox in summer 2010.

Delgado, who received a rocking chair with a plaque that read: "Puerto Rico Home Run King," said he will dedicate the next six months to his wife and young son and daughter before becoming involved in baseball at a local level.

Lou Melendez, vice-president of international affairs for Major League Baseball, said he was looking forward to working with Delgado.

"I have a partner who will help me promote baseball in Puerto Rico," he said.