It took about an hour of "communication" with a 37-year-old man before he surrendered and handed over his two-year-old daughter, bringing an end to a brief Amber Alert overnight, police say.

Police in nearby Brantford, Ontario issued the alert early today saying the girl and her father were last seen just after midnight leaving Brantford in a vehicle with two women.

Less than an hour later, the alert was cancelled after the girl was found safe. 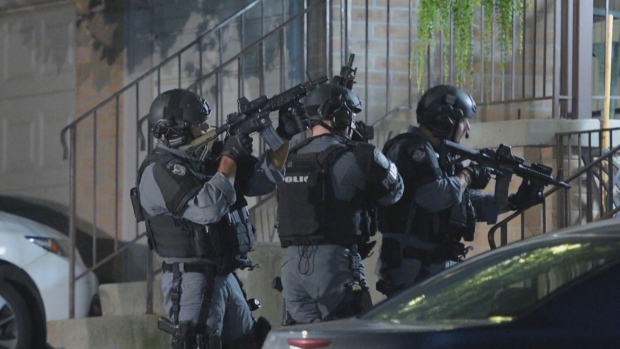 Police storm a property in Hamilton during the Amber Alert. (CTV News Toronto)

In a news release issued Thursday afternoon, police said that officers were called to an address on Bissett Avenue after receiving a call about an abduction and assault.

“The estranged father broke into the residence through the rear door. The suspect was confronted by the mother and another resident who were both assaulted and threatened,” police said.

“The suspect grabbed the two-year-old child and fled the residence in a vehicle with three other people.”

Hamilton police spokesman Const. Jerome Stewart says his department received word from Brantford police that the child and father could be in Hamilton.

He says officers arrested three other adults in relation to the case at a traffic stop just after 2 a.m., then received a tip that the father and child were at a home in the Central Mountain area.

Officers attended just before 3 a.m., and the two emerged from the house about an hour later with the child unharmed.

"Just having communication to make sure that everything transpired smoothly," Stewart said in an interview, saying there was never any risk to public safety.

On Thursday afternoon, police said that charges had been laid in connection with the abduction.

McManus has been held for a bail hearing.

Ontario Amber Alert has been cancelled. The child has been located safe.