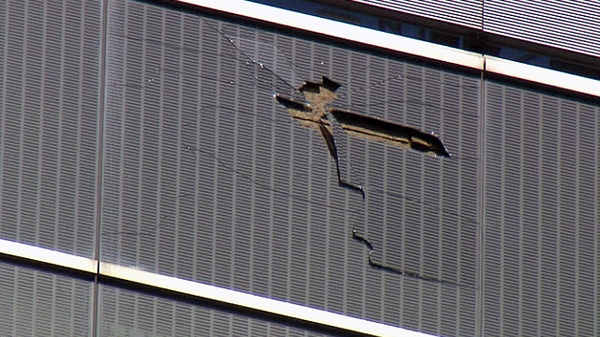 Queen Street West was closed between St. Patrick Street and Simcoe Street Monday after a piece of glass fell from the window on the sixteenth floor of an office tower at 180 Queen St. W.

Someone called police to report the fallen glass at 10:24 a.m.

No one was injured in the incident, police said, but they closed a section of the street to vehicles and pedestrian traffic.

Streetcars continue to travel along Queen Street West, but they are not stopping between St. Patrick and Simcoe.

Police said they are still looking into what caused the glass to fall and they still do not know when the street will open.

This isn't the first time glass has fallen from Toronto high rises.

On Saturday morning, glass fell from the Trump International Hotel and Tower at the intersection of Bay and Adelaide Streets.

No one was injured, and police blamed high winds for the incident.

Falling glass also prompted a group of Toronto condo owners to launch a class-action lawsuit against contractors and developers earlier this month.

In those cases, the owners and renters in the Murano Towers and Festival Tower condo developments were not permitted to use their balconies after glass fell from other balconies, shattering on the street below.